Gender gap in vaccination? Just four states inoculated more women than men even as India inches near the 18 crore mark

As per official data, the gender gap in vaccination is over 4 per cent nationally but high-Covid burden states like Delhi and Uttar Pradesh have over 10 per cent difference in male-female ratio.

NEW DELHI:  As states report shortage of Covid-19 jabs and people make a mad rush to book vaccination slots, gender divide in the vaccination drive is quite visible across states. Only four states Kerala, Karnataka, Chhattisgarh and Himachal Pradesh have vaccinated more women than men so far.

As per official data, the gender gap in vaccination is over 4 per cent nationally but high-Covid burden states like Delhi and Uttar Pradesh have over 10 per cent difference in male-female vaccination ratio.

However, two high-burden states Kerala and Karnataka have vaccinated more women than men. Also in the list are Himachal Pradesh and Chhattisgarh. Nagaland and Jammu and Kashmir have the widest difference in male, female vaccination numbers in the country, with around 14 per cent.

The gender divide in vaccination is also visible in some Northeastern states even though the number of Covid cases reported in these states are less when compared to high-burden states.

Nagaland at 14.3 per cent tops the list with widest gender divide followed by Jammu and Kashmir with  13.76 per cent. States like Uttar Pradesh, Punjab, Manipur, Arunachal Pradesh have male-female vaccine difference between 10-13 per cent. The figure is around 11 per cent for Chandigarh.

Amid reports of some vaccinated people developing mild-to-moderate Covid-19 symptoms, there has been a rush to book slots amid  shortage of the jabs.

Among the total 17.78 crore beneficiaries vaccinated so far (as per latest data on CoWIN portal) in the country, 7.3 crore are male, 6.5 crore female and 19,000 others. As many as 20,375 cases of after-effects of vaccination have also been reported.

ALSO READ | 216 cr COVID jabs to be available in 5 months between August-December, enough to cover all: Centre

The central government has opened vaccination for people in age group 18-44 years from May 1 but stated that they will have to pay for both the doses.

However, some state governments have announced to provide free vaccination to all age groups who are residents of the respective states.

The cumulative number of COVID-19 vaccine doses administered in the country inched closer to 18 crore, the Union Health Ministry said on Thursday.

It said 4,37,192 beneficiaries in the age group of 18-44 years received their first dose of COVID vaccine on Thursday and cumulatively 39,14,688 across 32 states and union territories since the start of the third phase of the vaccination drive.

"The cumulative number of COVID-19 vaccine doses administered in the country stands at 17,91,77,029 as per the 8 pm provisional report," the ministry said. 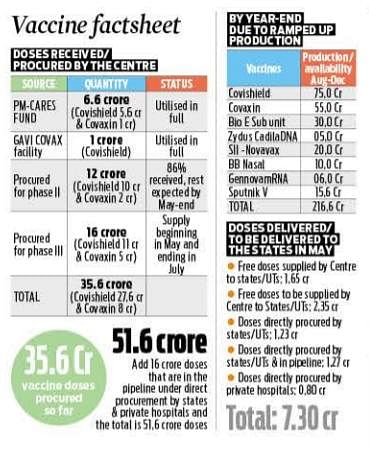 A total of 10,10,856 beneficiaries were vaccinated for the first dose and 9,64,320 beneficiaries received the second dose of vaccine as per the provisional report till 8 pm, the ministry said, adding that final reports would be completed for the day by late night.

The vaccination exercise as a tool to protect the most vulnerable population groups in the country from COVID-19 continues to be regularly reviewed and monitored at the highest level, the ministry said.

Meanwhile, Delhi Commission For Protection Of Child Rights chairman Anurag Kundu has written to the Union Health Secretary urging him to include pregnant women and lactating mothers under the coronavirus vaccination process.

Currently, they are excluded from the COVID-19 vaccination drive because of a lack of clinical trials data on the effect of coronavirus vaccine on these two groups.

"Annually, 2.6 crore women give birth, and another 2.6 crore are lactating mothers. This makes 5.2 crore women who are left out, a critical population both in numbers and their vulnerability priority. World-over maternal death due to Covid-19 is emerging as a concern," he said in a tweet on Thursday.

In the letter, he has advised that pregnant and lactating mothers be categorised as a high-risk group and setting up of a task force to track and monitor effects and evolve SOPs.

He has also suggested that there should be proactive communication to educate everyone to ensure informed consent.

Now we are on Telegram too. Follow us for updates
TAGS
Coronavirus COVID-19 India Vaccination India COVID Vaccination