During the one month it took to hold the elections, which began on March 27 and concluded on April 29, the state witnessed an unprecedented 25 times surge in daily Covid-19 positive cases.

KOLKATA: With the lockdown to contain a surging Covid-19 cases in West Bengal starting on Sunday, officials in the state’s health department warned the government to strictly impose the restrictions, saying the situation would go out of control otherwise.

The state has seen a steep surge in Covid-19 cases, blamed on the political gatherings during the course of the recently-concluded eight-phase Assembly elections in the state. During the one month it took to hold the elections, which began on March 27 and concluded on April 29, the state witnessed an unprecedented 25 times surge in daily Covid-19 positive cases. 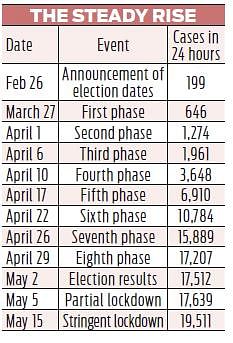 On February 26, the day the Election Commission announced the election schedule, about 199 people had tested positive. A month later, on March 27, when the first-phase of the election was held, as many as 646 daily cases were recorded. By the time the fifth phase was held on April 10, the number of daily cases had grown more than ten-fold to 6,910. The chief minister then requested the ECI to conduct the last three phases of the election in one go. But, the poll panel had rejected her request.

On the day the last phase of the polls was held on April 29, the state recorded a whopping 17,207 new cases in 24 hours. On May 15, the eve of lockdown, a total of 19,511 people tested positive. On the first-day of the lockdown in the state, Kolkata police arrested 158 persons for not wearing masks, four for spitting in public. The police also impounded 59 vehicles and arrested 23 for flouting restrictions.

The Centre has asked the state government to make use of the services of the Accredited Social Health Activists (ASHA) to conduct door-to-door survey in rural areas of the state. The Centre has also asked West Bengal to reach out to the people in villages and tests their samples as much as possible.

In a major goof-up by the West Bengal health department, the family of a man, who was under treatment for Covid-19, was handed his death certificate even though he was alive. “All our family members broke down. We went to the mortuary but the body was not there. We then went to the rear portion of the hospital and looked through a window, and we saw my brother sitting on the bed," said the elder brother of the patient.

Now we are on Telegram too. Follow us for updates
TAGS
COVID 19 Coronavirus Pandemic COVID 19 in India West Bengal Polls