Battle of the sexes

Serena Williams fired back Monday at tennis legend John McEnroe’s remark that she would only rank about 700th on the men’s circuit.

Serena Williams fired back Monday at tennis legend John McEnroe’s remark that she would only rank about 700th on the men’s circuit. About 44 years ago, a similar row erupted and it culminated in a match dubbed “The Battle of the Sexes” 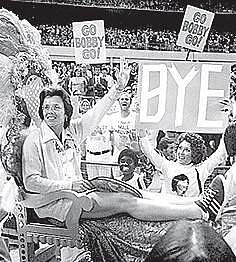 Mother’s Day Massacre
It all started when Bobby Riggs, who won the Wimbledon in 1939, decided to return to the spotlight in 1973 by challenging women players. Billie Jean King repeatedly turned down his request, but the then No.1 Margaret Court agreed to play. She lost 6-2, 6-1 in what became known as “Mother’s Day Massacre”

Misogyny on court
After this match, King agreed to Rigg’s challenge. The 55-year-old made a slew of misogynistic comments before the contest. “The best way to handle women is to keep them pregnant and barefoot,” he said

On September 20, 1973, 31,000 people crowded the the Houston Astrodome to watch the “Battle of the Sexes” contest between Riggs and King. Another 100 million watched the match on TV, making it one of the most viewed tennis matches

King reclaims throne
King entered the court held aloft by half-naked men and Riggs on a rickshaw surrounded by scantily-clad women. The 29-year-old King won 6-4, 6-3, 6-3. “King squashed Riggs with tools (then) synonymous with men’s tennis, the serve and volley. Most important ... she convinced skeptics that a female athlete can survive pressure-filled situations,” the NYT reported then

Women in sports
The match was played just a year after “Title IX” was passed in the US. “Title IX” granted women equal access to athletics by high schools and colleges

Stay up to date on all the latest Opinions news with The New Indian Express App. Download now
(Get the news that matters from New Indian Express on WhatsApp. Click this link and hit 'Click to Subscribe'. Follow the instructions after that.)