After expiry of June 2 deadline, it is President who is empowered to take a decision he deems fit in regard to division of assets between AP and Telangana.

The other day, when the State government said that moving the Supreme Court will be one option before it for securing justice in the division of assets of the institutions between the two sibling States of Andhra Pradesh and Telangana, it has become very clear that Chief Minister N Chandrababu Naidu has begun increasing pressure on the BJP-led NDA subtly -  just enough to remind it of its obligations, but at the same time doubly ensuring that it would not hurt Prime Minister Narendra Modi.

In fact, Naidu has been waiting with infinite patience for the last three years for what is due to the State from the Centre. Though several promises had been made for the State in the AP State Reorganisation Act, 2014, he has to use tact and diplomacy to make cogs in the wheels of the administration at the Centre move.

Even when his ministers, while making a scathing attack on YSRC chief YS Jagan Mohan Reddy on his recent representation to Modi, went a little further and wondered why the Prime Minister should see a person who is facing charges of corruption, Naidu reined them in.

Naidu, since beginning, has remained very faithful to Modi - he had compromised on special category status when the NDA told him to forget about it and that he should get ready to settle for a package. Whenever Naidu had to get things done at Delhi, he used the most polite words available in drawing its attention. He visited Delhi quite a number of times and used his persuasive skills in ensuring funding for mammoth Polavaram project, capital Amaravati and institutions promised for the State. 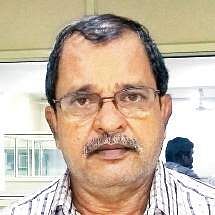 He also kept seeking funds that had to be devolved to the State from the Centre to compensate for the loss of State’s revenue as a result of bifurcation, but he had not taken any confrontationist attitude since he is worried that if he does, the Centre might take a hardline and delay the benefits promised in the bifurcation Act.

Had he been Naidu of 1999-2004, he would have forced the Centre to do his bidding, but he is Naidu of 2014-19 now with no bargaining power as the NDA does not need his support for its survival. Therefore, the only option before him is to remain pally with the Centre and persuade it to grant what is due to the State from time to time.

The contention of AP is that the assets have to be divided on the basis of population ratio of 58:42 and even the Supreme Court in its direction to the Centre said the same in 2016. The apex court’s order had been interpreted by both the governments differently - Telangana government sticking to its stand that intuitions belong to the State where they are located and AP insisting that apportionment should be on the basis of population ratio. As no workable solution had emerged, the issue has remained unresolved even as the deadline of June 2, 2017 is fast approaching.

After expiry of the deadline, the President would have the powers to take whatever decision he deems fit in regard to the division of assets. In such a scenario, no one would know which way the cookie would crumble. According to sources, recourse to the Supreme Court might not be of any use since the AP government had already approached and secured a verdict but its implementation could not be done because of differing interpretations.

The State leadership is not very comfortable with the present state of affairs since division of assets of the institutions is not only one problem in the long list of unresolved issues. For instance, after compromising on special category status, the Centre had promised special package but even now, it is not clear as to how much benefit the State would get under the new arrangement.

It was painful to watch the Chief Secretary of AP slugging it out with the Secretary in Finance Ministry a couple of days ago on how much AP is entitled under the special package. At the meeting, the CS is understood to have put forward an argument that the State should get a benefit of Rs 3,000 crore per annum amounting to Rs 15,000 crore for the entire five-year term, but the Centre said the commitment would be about Rs 2,500 crore per annum and Rs 12,500 crore for five years. The issue has not been resolved yet.

As time is running out and Naidu has to answer searing questions from the Opposition YSRC on promises not kept, the Chief Minister is trying to use pressure tempered in politeness to get as much benefit as he could for the State. It remains to be seen to what extent he would succeed in his mission.