Madhavaram in Thiruvallur District, is an ancient place which was part of the Pallava Empire. Inscriptions reveal that it was originally called Ekadhira Chaturvedimangalam after the title Ekadhira of

Madhavaram in Thiruvallur District, is an ancient place which was part of the Pallava Empire. Inscriptions reveal that it was originally called Ekadhira Chaturvedimangalam after the title Ekadhira of the Pallava King Nandivarman II Pallavamalla (731-796 AD) who was a devotee of Vishnu. The Vaikuntha Perumal temple in Kanchipuram was constructed in his reign and the Karivaradaraja Perumal (Vishnu) temple in Madhavaram is also believed to have been constructed by the same ruler.

The central sanctum enshrines the main image of Venkata Varadan, seen in a standing posture with four arms, wearing a salagrama garland and a sengol, the royal staff of authority, resting on His right arm. The deity is flanked by Goddesses Sridevi and Bhudevi. The processional image (utsava-bhera), worshipped as Karivaradaraja Perumal was discovered about fifty years ago underneath the ground and subsequently consecrated. The temple is named after this utsava-murti. Dhanvantari, the God of Medicine in a standing posture is consecrated here. He holds  the Sankha and Chakra in the upper hands while the lower left hand holds the pot of nectar (amrita kalasha) and lower right hand holds a leech. 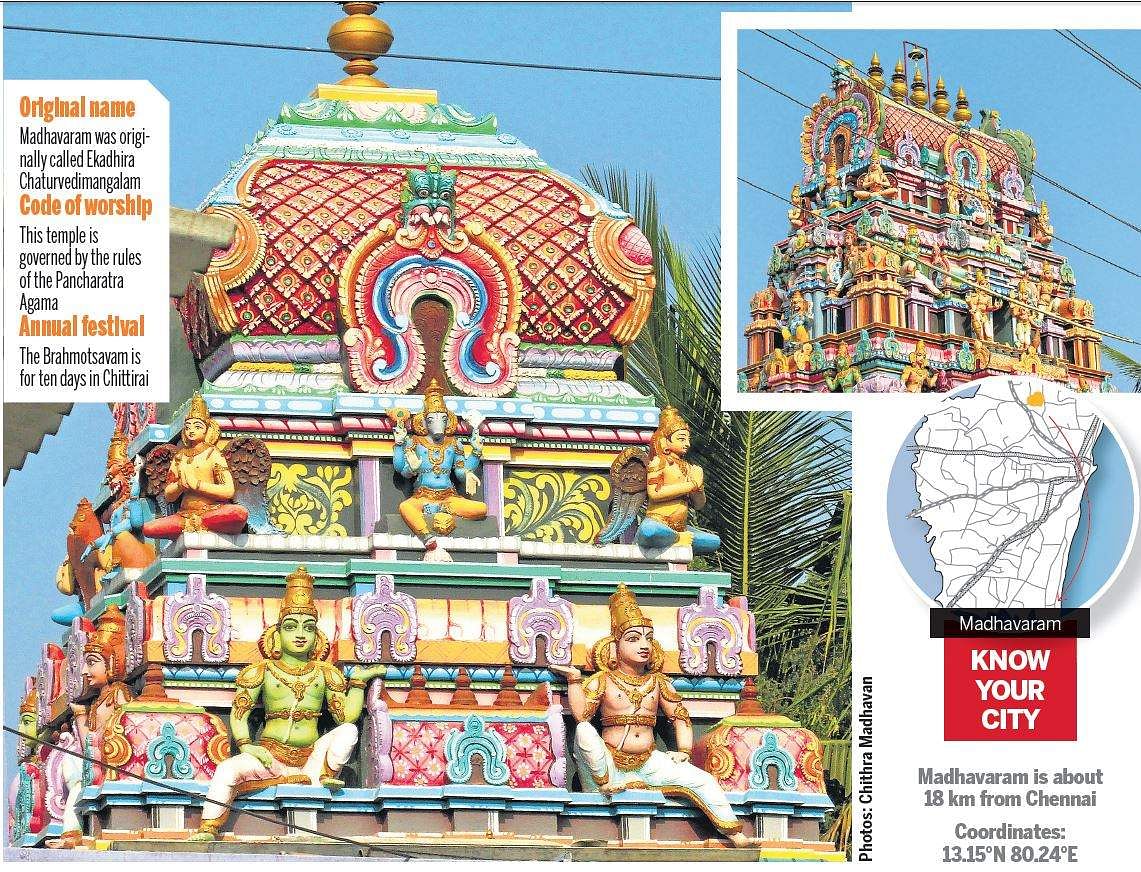 There is a unique image of Sudarsana (the personification of the discus of Vishnu). This deity, usually seen alone is consecrated here with Goddess Vijayavalli Thayar. The sacred kitchen (madapalli) in this temple is presided over by Goddess Madapalli Nachiyar.

Near the entrance is a 21-feet tall image of Anjaneya.  The temple has a sanctum for Kodandarama enshrining the stone and metal images of Rama, Lakshmana and Sita and also an image of Thyagaraja, the devotee-composer, seated with a tampura in His right hand and manuscripts in the left.

More from Opinions.
Now we are on Telegram too. Follow us for updates