As one of the 275 Padal Petra Sthalams, the deity at the Vilvanathishwarar temple has been praised in ancient Tamil hymns

The Shiva temple dedicated to Vilvanathishwarar temple in Thiruvalam (Thiruvallam) is one of the famous 275 Padal Petra Sthalams, wherein the deity has been praised in the Tamil hymns of the Nayanmars or important devotees of Shiva. Thirugnanasambandar, the famous Nayanmar, sang about the greatness of Shiva here. The main sanctum, which enshrines the Swayambhu (self-manifested) Shiva Linga, faces east.

An interesting feature here is that the Nandi faces away from Shiva. According to temple tradition, a priest of this shrine who used to bring water for abhisekam (ritual pouring of water on the deity) was troubled by a demon named Kanjan. Shiva bade Nandi to kill the demon which was duly done. Nandi is said to face the outside of the temple in order to safeguard it. In fact, there are three Nandis in this temple, one behind the other, and they all face the same direction. 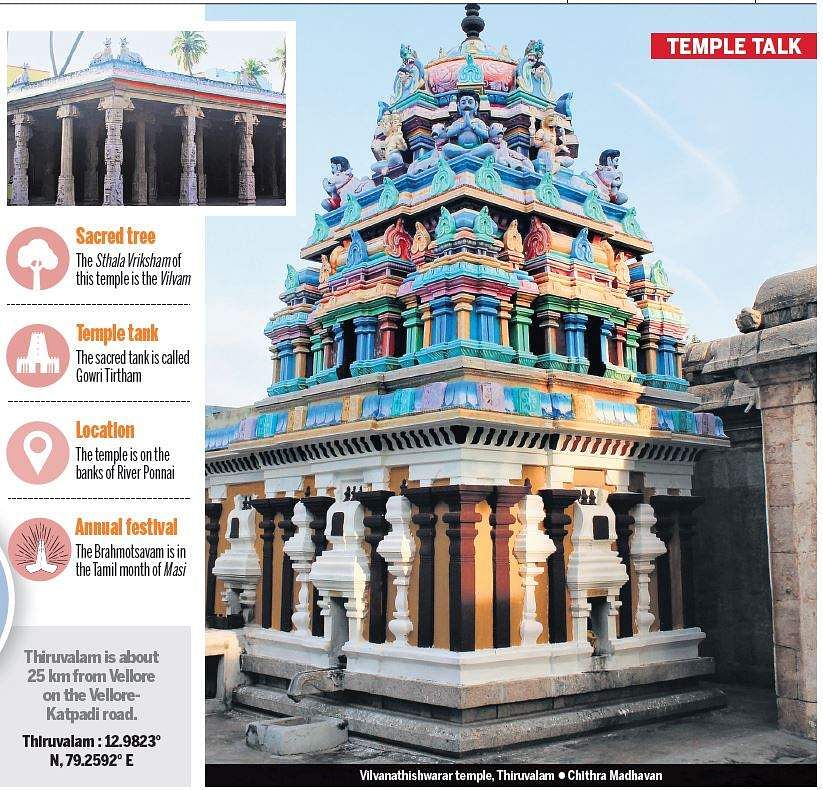 Goddess Parvati is worshipped as Thanumadhyambal. The sanctum for Muruga is important as the great devotee of Subramanya, Arunagirinathar of the 15th century, sang about this deity. There is an image of Kani-vangiya Vinayaka (Ganesha who received the fruit) here. This is in connection with the story of a competition with his brother Muruga as to who could go around the world fastest. While Muruga rode fast on the peacock, Ganesha circumambulated Shiva and Parvati, thus proving that parents are one’s world. Since ‘valam’ in Tamil is to circumambulate, this place got the name Thiruvalam.

A large number of inscriptions are seen here, many of them belonging to the Chola dynasty. They mention the name of this ancient place as Tikkalivallam and the name of the deity as Thiruvallam Udaiyar. Festivals for the deity, feeding houses for devotees and donation of ornaments and money for rituals are mentioned in these epigraphs.

Stay up to date on all the latest Opinions news with The New Indian Express App. Download now
(Get the news that matters from New Indian Express on WhatsApp. Click this link and hit 'Click to Subscribe'. Follow the instructions after that.)