Significantly, men at 89 per cent and women at 85 per cent supported the idea of re-elections to have more power over corporators.

Hyderabad voters want more power to control and punish corporators and municipal officials who do not perform. Over 91 per cent respondents in a recent study stated they felt ‘anger and frustration’ about the State’s indifference towards people’s problems. At the same time, they also expressed fear of angering those in power and said it influenced their vote.

The Urban Distress and Reforms Study 2020, a research-based study of voter perception at the municipal level, was conducted in 15 of the total 30 circles of the Greater Hyderabad Municipal Corporation (GHMC) area from November 1 to 15.

The findings of the study revealed that 95 per cent respondents supported the Right to Recall of non-performing corporators before the end of their term. Also, 74 per cent wanted a similar power over the careers and tenures of municipal officials. This is significant in view of the GHMC elections in a city recently ravaged by floods. 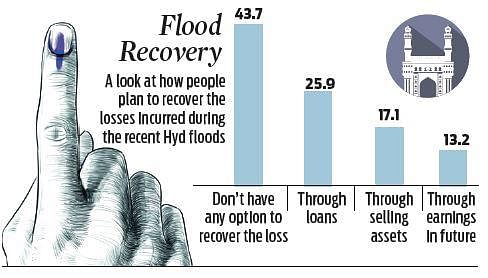 Notably, in view of the hardships faced by the city residents, two out of every five people studied stated that affording food had become more difficult. Among these, over 90 per cent respondents stated that their food consumption had reduced as compared to before. An overwhelming 92 per cent people said that their financial troubles had forced them to postpone plans, which would ‘negatively impact their quality of life or aspirations.’

Over 91 per cent felt anger and frustration when corporators did not care about their problems, and of these, higher numbers were among those with lower levels of literacy. The levels of anger were lower among the general castes but was almost even among all income segments.

However, over 74 per cent felt fear of angering those in power – the highest proportion being in ST category respondents at 87 per cent, and among those citizens with schooling of up to 12th class at 82 per cent. Across all categories, 68 per cent respondents said that this fear had an impact on their vote.

The findings also revealed that almost 69 per cent felt corporators performed their duties mainly before elections. About nine out of 10 persons believed that voters have no powers over corporators once they are elected. About 88 per cent respondents were prepared to vote again in a Right to Recall re-election to oust the non-performing corporators and elect a fresh candidate.

Significantly, men at 89 per cent and women at 85 per cent supported the idea of re-elections to have more power over corporators.

Recall is not a new right at the municipal level, and has been implemented in Madhya Pradesh since 2001 and in Chhattisgarh since 2007. In these States, this reform is an extension of the no-confidence motion, which is put on ballot for the municipal voters to decide.

The study was undertaken by the New Delhi-based research organisation, Institute of Perception Studies, which works in the areas of electoral reforms and democratic deficit, with special focus on municipal and panchayat levels.

(The author is a researcher at the Institute of Perception Studies, New Delhi)