There is no country in the world like India which has such a diverse music culture. Bhangra, rap, classical, you name it.

There is no country in the world like India which has such a diverse music culture. Bhangra, rap, classical, you name it. It is steeped in celebratory customs, harvest events and marriage forms where music is the binding glue. And our films wrap all this with stories dependent on music scores. Yet as a business, the music industry limps along, ripped to the bone with piracy and hardly any growth to show for the years of entertainment it has offered.

As a reporter covering the entertainment and media beat, this writer at the beginning of the century heard tales of woe how piracy was sucking the business dry. Then, too, the Indian Music Industry (IMI), a lobby for more-than-hundred labels, was fighting piracy with hole-in-the-wall outfits churning out copied music cassettes (MCs) and CDs. It was then a Rs 750 crore industry. 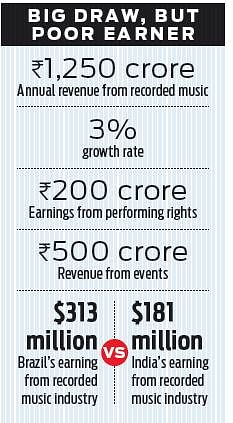 The only thing that seems to have changed are the forms of piracy – it is digital ripping with websites hosting pirated music and films from which law-abiding citizens help themselves to free content. After two decades, President and CEO of IMI Blaise Fernandes says the industry generates legit annual revenue of around Rs 1,250 crore from recorded music, at a miserable annual growth rate of about 3 per cent. If one adds earnings from performing rights (Rs 200 crore) and music events (Rs 500 crore), it may be close to Rs 2,000 crore. Fernandes says a recent survey showed that 67 per cent of respondents frankly admitted they ripped music for free off pirate sites. The loss to the industry is close to Rs 1,000 crore.

This is in a market where music consumption is very high. The same survey, for instance, found that 80 per cent of internet users identified themselves as ‘music fanatics’ or ‘music lovers’, higher than the global average of about 54 per cent. India has fallen behind other markets, says Blaise Fernandes. South Korean music label Big Hit Entertainment, which owns the K-pop band BTS, launched its IPO in October last year with a $4 billion valuation. China’s Tencent Music, listed on the New York Stock Exchange (NYSE), was valued at $26 billion in September 2020.

“Will India ever witness the day when its music companies see these types of valuations?” he asks. Brazil earns $313 million from the recorded music industry, but India earns just $181 million, though our population is six times that of Brazil. The digital era should have helped stem piracy, but the opposite seems to be true for India. IMI and Fernandes do not seem to have answers why this is so, but they point out markets like China have succeeded in curtailing pirated music sites where India has failed. China has a music industry of $53 billion, while India’s is still in its infancy.

But the Chinese industry has been more innovative with digital music streaming sites hiring and grooming artistes directly rather than waiting for music labels to offer them. For example, Tencent Music and NetEase offer artistes attractive contracts to work directly with them instead of through a record label.  The IMI chief says the problem is the Indian music industry is not being paid the worth for its intellectual property, and government regulation stymieing the market. “Radio is worth Rs 3,100 crore, but pays the music industry just Rs 75 crore in royalties annually,” he says, adding: “The erstwhile Copyright Board decided the rate at 2 per cent of the net advertising revenue.

The low rate, which continues today, was justified two decades ago as radio was in its infancy. Now, it is more than twice the size of the music industry.” Fernandes says it should be 10 per cent of radio’s topline earnings of around Rs 300 crore a year. “TV spends around 20 per cent of its revenue on developing content and bears the risk of the content being unsuccessful. Radio bears no such risks and can cherry-pick the songs.” The music industry is again facing a huge leakage in revenue, estimated by some at Rs 200 crore, with the illegal use of music by the short video apps like TikTok.

Though TikTok is now shut down in India, a host of new sites like Roposo, Triller, Taka Tak, Josh, Mitron, and Snack Video have sprung up and taken over. Blaise Fernandes is hopeful that the law will be amended soon and the industry too will shift to a ‘free market’. As it is 70 per cent of recorded music in India is film-based and the symbiotic relationship can be seen in music rights sales financing films, especially in the South.

“Music is the film industry’s VC; they provide the seed capital,” he says. Crystal-ball gazing, the IMI chief predicts post-reforms, the industry, which spends just Rs 750 crore in content creation and distribution, will see another Rs 7,000 crore coming, most of it from the current foreign players like Sony, UMG, WMG and Believe.