Fuel prices are killing both consumer and consumption

It was a milestone for fuel price watchers. A couple of days ago petrol crossed Rs 100 a litre in Mumbai, and in several cities in Rajasthan and Madhya Pradesh.

It was a milestone for fuel price watchers. A couple of days ago petrol crossed Rs 100 a litre in Mumbai, and in several cities in Rajasthan and Madhya Pradesh. After a two-day hiatus, on Friday prices were hiked again, and it looks like even diesel in Mumbai (Rs 92.99/litre) and Chennai (Rs 90.38/litre) is now inching towards the Rs 100-per-litre mark.

From the beginning of the first wave of the pandemic in mid-March last year, petrol prices have gone up approximately 25 per cent. On 18 February, this year, 114 countries in the world sold petrol cheaper than in India. The cheapest were Venezuela and Iran, both oil producers, that sold at Rs 1.45 and Rs 4.50 per litre, respectively. Pakistan’s pump rate was half of India’s at Rs 51.14 while even the USA rate was at Rs 54.65 per litre. The average world price of gasoline is Rs 78.71, which is at least 20 per cent cheaper than India’s average. 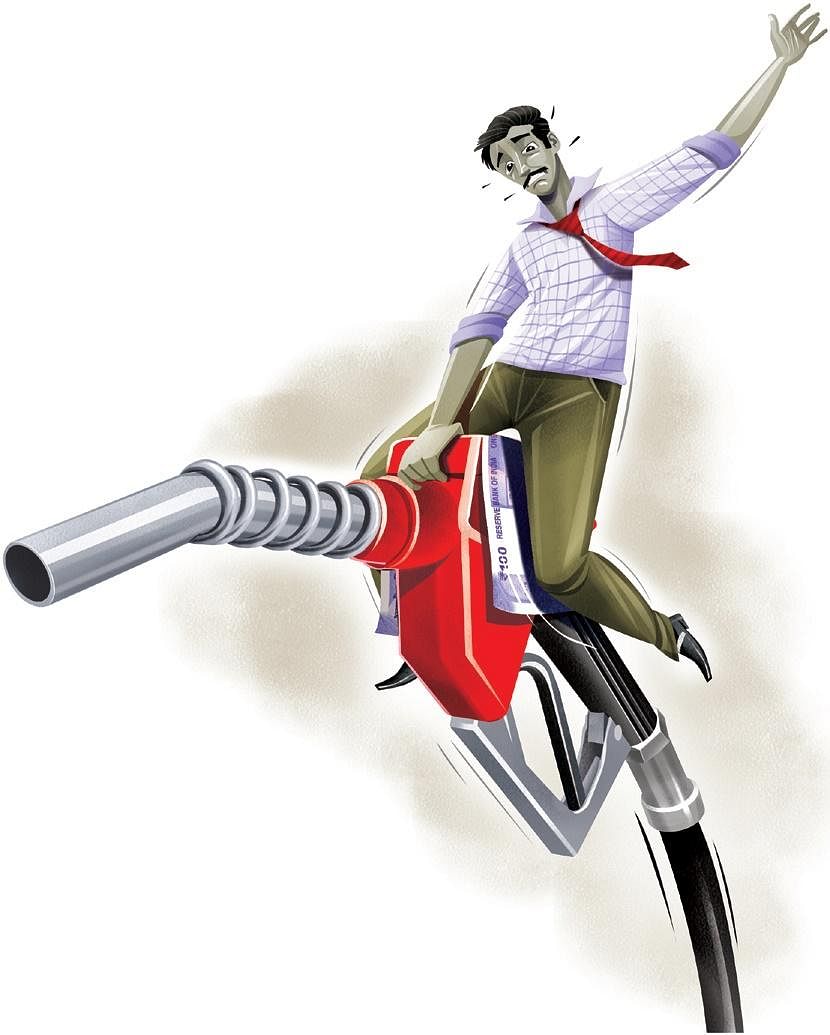 Which way, crude prices?
The cost of crude oil is obviously the biggest input cost for retail fuel sold at pumps. From around $52 a barrel for Brent crude at the beginning of calendar 2021, crude has moved to a two-year high in June 2021 to beyond $71 a barrel.The freeze on international economic activity when the pandemic first broke out last year, had reduced demand to a trickle, and had forced down crude prices to below $20 a barrel for the first 5 months of 2020. The Organization of Petroleum Exporting Countries (OPEC) hit back once economic activity began cranking up again. Imposing a voluntary cut of around
7 million barrels a day, the group led by Saudi Arabia continued the production cuts into 2021. As demand rose and supply was held down, crude prices have continued to climb.

This upward trend will continue as more people get vaccinated against Covid-19, and
increased economic activity spurs demand for energy. The US’ Energy Information Administration’s (EIA) Annual Energy Outlook says by 2030, world demand will drive up Brent prices to $89/b. By 2040, prices are projected to be $132/b. By then, the cheap oil sources will have been exhausted, making it more expensive to extract oil. By 2050, oil prices will be $185/b.

The one way to reverse the situation is to stop the rapacious taxation of fuel. The general thumb rule is: fuel prices are higher in the richer countries because of higher taxes, while the poorer and oil producing countries, because it is a necessity of daily life, prefer to keep taxes and prices down.
Unfortunately India, despite its overwhelming number of poor consumers, uses this commodity to beef up government revenue at the cost of the people.

Overtaxing oil
Value-added tax (VAT) and other central and state taxes account for a humongous 67 per cent of the pump price of petrol and 61% of the retail price for diesel. Surely taxes can be rationalized to make life more equitable for the poor consumer?

India imports over 80 per cent of its oil needs, and international prices change on a daily basis. The oil marketing companies (OMCs) therefore peg their retail prices by benchmarking them to a 15-day rolling average of international prices. However, here too opportunism kicks in to cream the consumer.
India, when oil prices hit rock bottom in March last year, bought 16.71 million barrels of crude at $19 a barrel in the April-May 2020 period to fill up its strategic reserves and saved Rs 5,069 crore in the bargain. Every dollar per barrel drop in crude prices reduced India’s oil import bill by Rs 10,700 crore on an annualized basis, but you and I never saw these benefits.

Nearly three years ago, when crude was at $75 a barrel, pump prices for petrol were averaging Rs 75 a litre. Today Brent crude is around $72/b, and petrol is retailing at our pumps for over Rs 100/litre. By sleight of hand, the government had hiked excise duty whenever international prices fell; but did not roll them back when crude prices rose. The crude (pun intended!) ‘theft’ was justified by citing the need for revenue to tackle the economic crisis the pandemic had caused. During 2020, the central government hiked excise on petrol by Rs 13 per litre and on diesel by Rs 16 per litre.

As a result, excise duty collection during April-November 2020 shot up 48 per cent to Rs 1,96,342 crore from Rs 1,32,899 crore in the same period in 2019.Besides exploiting the consumer, these taxes also are a drag on consumption and economic recovery. The cascading effect of high diesel prices on transportation and, therefore on the cost of most daily commodities is huge, and is a major contributor to inflation. The slump in vehicle sales, for no small part due to constantly rising fuel prices, is again a glaring symbol of how the government is killing consumption.Both the Union and state governments have to stop thinking of fuel products as the proverbial Golden Goose, and roll back some of these onerous taxes.