If imitation is the best form of flattery, invective is the best form of battery. PM Narendra Modi is least amused by Rahul Gandhi pollnapping his campaign style with aggressive verbal fusillades. In 2012 and 2014, Modi was the Grand Inquisitor of Indian democracy, raising serious questions about the performance of the UPA government. His favourite target was the Gandhi Parivar and their unconstitutional role in governance. Neither Congress President Sonia Gandhi nor her successor-in-waiting Rahul could effectively refute his charges.

Modi had rained down a barrage of incendiary questions on the Congress’ record of corruption, tawdry development, poor womens’ empowerment, pallid defence policy, weak anti-terrorism mechanisms and upholding dynastic rule. These questions, raised at every meeting of Modi — big and small — got thunderous applause from mammoth audiences. Subsequently, he delivered crippling body blows to the Congress and its leadership by trouncing them in almost all the Assembly elections held in the past three-odd years. As for the rest, his commander-in-chief Amit Shah, strategised to set up BJP governments in states where it didn’t even have a majority.

The duo dominated governance and politics. They wrote the narrative. They dictated the discourse. They made alliances. They broke alliances. They painted vast saffron swathes across the geographical expanse of India. Even after 40 months in office, Modi’s stature as a clean leader who delivers with a mission and vision is intact. His popularity is stratospherically higher than the combined acceptability of all political leaders including his own party. 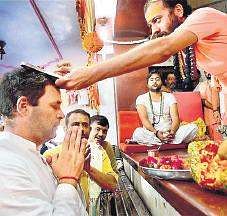 Gujarat believes in him and his words. However, the contours and content of the BJP’s election effort are bafflingly influenced more by Rahul’s rhetoric than the PM’s stature as a national leader with global acceptability. Rahul has seized on the BJP model of hyperbole. He is stitching alliances and asking uncomfortable questions. His 10-Question Template targets the foundation of the Modi Model of Development. The Congress Superson is challenging each and every claim of the BJP government, from economic growth to women empowerment. He has sought evidence on the delivery of promises the Modi government had made to voters.

By relentlessly targeting unemployment and lack of affordable housing, Rahul has been poisoning minds of the Gujarat electorate about the BJP’s allegedly false pro-people claims. He has also charged the ruling party for bankrupting Gujarat and jeopardising the safety of kids and women. With statistical cunning, Rahul tweeted that the government’s economic policies have put each voter in debt to the tune of `37,000.

Team Rahul has also copied the BJP’s social media technique with hashtags such as #Vikas Gandho che, #Congress Ave che and more. As a sign of the times, the vicious verbal war was fought not on Gujarat’s streets but in cyberspace. In just a month, Google and other Internet platforms would have attracted more traffic and revenue, driven by comments and calumny posted by the opposing armies of political volunteers. A senior Congress leader claimed that Modi was suffering from Rahulphobia. He insisted the PM has referred to Rahul directly or indirectly 629 times at 29 rallies till December 7, as against the Congress (427), Sardar Patel (209), Vikas (103) and Hindu and Ram (27).

He also claimed Modi never referred to his development model even once. When Modi and his partymen exploited the malicious attack of Congress motormouth Mani Shankar Aiyar on the PM, Rahul disarmed the BJP by suspending Aiyar from the Congress, and demanding similar action against violent fringe elements in saffron.

The BJP, in spite of its credible governance record both at the Centre and state has chosen Rahul-bashing over promoting its own development agenda. For the first time in a decade, Rahul has discovered his voice and unleashed cohesive and piercing political arguments against his foe. His newly-minted aggressive initiative to shed his own and his party’s perceived anti-Hindu image has taken the BJP by surprise. By visiting a temples, he wishes to drive home the point that the Gandhis, too, are devout Hindus, but do not wear it on their sleeves like their adversaries. On the face of it, Rahul’s newfound love for Hindutva and his public display of divine reverence can be dismissed as political opportunism.

But the BJP has walked into his trap by questioning his religion and faith. From the tone, tenor, style and substance of the Congress election strategy in Gujarat, it is evident that it is deploying soft Hindutva against Modi’s hard Hindutava. Middle-level BJP leaders and MPs have made Rahul’s job easier by deriding him as Khilji’s son, raising doubts about his Hindu origin and raking up his purported signature in the visitor’s book of Somnath Temple. They also slandered his pedigree from Jawaharlal Nehru to Sonia Gandhi. The Congress lapped up the challenge with elan. They rejoiced in the opportunity to regain the Hindu tag they had lost years ago.

The Gandhi family’s propaganda engine was firing on all cylinders. Family pictures of Nehru weddings with Hindu rituals were publicised widely. The Congress even became a Hindutva manqué by proudly claiming Rahul was a Janeudhari (a man wearing the sacred upper caste thread) Hindu, solely committed to the Hindu way of life. The BJP’s verbal brigade in turn ridiculed the Congress’ new epiphany. On the other hand, BJP ally Shiv Sena hailed Rahul’s temple visits. Its mouthpiece Saamana thundered that the BJP should have welcomed Rahul’s temple trips, which signal the victory of ‘pro-Hindutva’ forces. It claimed that the Congress leader could even counsel his party to adopt a ‘soft-Hindutva’ line and that the RSS should openly felicitate Rahul for taking such a step.

Getting Shiv Sena’s endorsement for Rahul’s Hindutva makeover couldn’t have come at a better time for the Congress. Though Rahul’s grandfather was referred to as Pandit Jawaharlal Nehru or Panditji, India’s first prime minister had retained his liberal and secular image till the end. His grandson knows the Muslims are unlikely to ditch the Congress. It is the wavering Hindu vote, which he needs to attract. The BJP would be well advised to consider whether Rahul’s Gujarat campaign is a baby step towards acquiring the title of Pundit Rahul Gandhi.