No RSVP for the Gandhis now

This is not a requiem for a friend. It is a bittersweet celebration of relevance. People are dispensable, but individuals are not. Personalities who have shaped institutions through individuality and invisible inimitability become institutions themselves. One such edifice was Ahmed Patel, the Grand Old Vizier of the Grand Old Party, mentor and friend to prime ministers and Congress presidents, and the Caliph of Concord who could reach out across political fences to mend them and establish a confluent conversation whose skein still holds. In New Age Indian politics, it’s only individuals who dominate discourse and direction. Ideologies are tradable products.

Individuals are the connectors, influencers, facilitators and mediators. Patel was that rare person who was all these above, rolled into one. His unexpected passing at the age of 71 will have nation-wide influence not only on the Congress, but also the pan-political narrative. He was a Fakir with Facets: loyal, affable, hard working but smilingly secretive. To those in the know, he was the most visible of all low- profile Congressmen. Now that the GOP has lost its credible link between its past and the present, and the old and the young, the disintegrated national Opposition will find it tough to mutually connect and bond with the Congress. Ahmed Patel was both an idea and an ideator, defining a bygone Congress where amiable enmity was temporary.

He was the force behind keeping his party relevant in spite of its twice blighted routs, the unseen hand that ensured the political relevance of its highly visible master mascots. At a time when the Family faces the worst-ever revolt from within since Indira Gandhi did in 1969, Patel was able to limit the dissatisfaction to vocal dissent without allowing the anger to escalate into a coup. Through persuasion and firmness, he successfully prevented the rebels from taking on the Gandhis directly. Now with him gone, the G Gang is unlikely to find an equally dedicated messenger to carry their message to followers. Ahmed Patel was the priest who delivered the blessings of the gods to their devotees without adding his own mantra. He was the high priest of silent action. 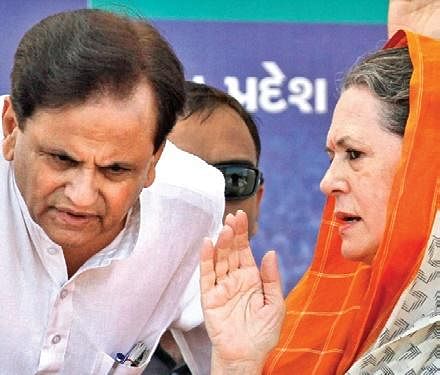 The 130-year-old Congress is now fatigued with political asthma. Patel was its only oximeter. After the party’s abominable show in the Bihar Assembly elections, the electoral efficacy of the Gandhis is now in question. A large majority of Congressmen are convinced that the G-Gene cannot incapacitate invincible Modi. They feel la famiglia has not only failed to provide an alternative agenda to the nation, but has also let down the organisation by foisting leaders with little grassroots connectivity and credibility.

The Congress has lost its claim to be the national Opposition’s voice after Ahmedbhai’s death. Only, he could make meetings between egotistical and temperamental Opposition leaders and keep Sonia Gandhi wrinkle-free. Ever since the Congress lost the Centre in 2014, the symbiosis between the Gandhis and their own satraps, too, has been fading.

Rahul has been a politician for the past 16 years, wielding immense power without responsibility. There has never been before two centres of powers in the Congress. Ever since Sonia became the party president in 1998, she has been dependent on her children and Patel to manage the oscillating outfit. It was after the NDA’s accidental ouster in 2004 when she acquired humungous clout.

The party’s Indraprastha Redux was marked by the entry of Rahul as a Lok Sabha member and later as the party general secretary. Unlike his father Rajiv, who customised the Congress with professionals while retaining relationships with his mother’s loyalists, the son chose to operate from a highly secured habitat, restricting the old Congress warhorses to the stables. Currently, the party is at war with itself. Sonia is not keeping well, and Rahul is expected not only to become an integral part of the Congress but also give it a new slogan and action plan.

Moreover, in coalition politics, he has to manifest his moxie in reaching out to political parties. Unfortunately, he hasn’t shown any inclination to engage with either his own senior leaders or the Opposition. Even during his brief stint as party chief, he was more into Modi-bashing than reviving his organisation using his own stamp and temper. Though he is more acerbic and focussed on the anti-Modi agenda than his colleagues, Rahul 3.0 is unable to rally his army behind his agitational and confrontationist campaign.

Perhaps, Rahul’s inability to rise as an alternative national leader lies in the Congress ecosystem itself. The party’s karma seems to suffer under the Gandhi stewardship. True leaders are born through renunciation and renewal like Indira and Sonia who gained fame, authority and verisimilitude through aggressive accommodation. and took the highest office in the land. Indira became India’s first woman prime minister by first adopting allparty factions and later trouncing her rivals through the democratic process. She used her office to build herself up as the country’s mightiest monarch. She split the Congress and created an alternative organisation.

The Prime Ministerial label was her lethal weapon. The Congress became Indira. After her assassination, Rajiv, then an MP, succeeded her in the dark shadow of mob riots and mourning. Though he lost a second term, he carried his party and Opposition leaders along because he was an ex-prime minister and not just another Gandhi.

The clan lost both party and power under the Machiavellian but uncharismatic Narasimha Rao who couldn’t retain his grip on the outfit. Instead of taking direct control of the Congress, Sonia and her promoters installed Sitaram Kesri as an interim president to be ejected in 1998 and replaced by herself. Till 2004, she kept building and rebuilding bridges with known adversaries, making alliances with just about anyone.

She installed a non-BJP government at the Centre. But it was her decision to decline the PM post that made her the most acceptable leader of the ruling alliance. With Manmohan Singh as the prime minister, Sonia and her team drove the government during the first term. She became more powerful than the prime minister because she made a rare sacrifice.

But Rahul possesses no such virtues. His loyalists believe he committed a cardinal mistake by not joining the government as a minister or the prime minister when Manmohan Singh offered to quit in his favour. They feel RG as Chief Executive even for a short term would have added gravitas and a degree of official authority to his persona a la papa.

It was obvious the Congress would have lost the 2014 election anyway. But as an ex-prime minister, not a former Congress president, Rahul would have been a unifying and not a divisive personality. He sidelined leaders like Patel. He ignored senior faces and failed in creating credible political architecture. Now when the nation needs a healthy Opposition, there is nobody in the Congress who has the glue to bring other party pashas together on one platform.

With Patel also died the alpha messenger — the flag bearer of unadulterated unity of purpose. While the Congress faces the real threat of disintegration, the Opposition parties will have to fight Mighty Modi and his Mann ka Mantra on their own only to bite the dust — from ashes to ashes, from dust to dust. But even before the dust has settled on Ahmed bhai’s legacy, the last dream of the Gandhis to stay on as their party’s eternal beacon may already be turning to dust.

Now we are on Telegram too. Follow us for updates
TAGS
Gandhi family Sonia Gandhi Rahul Gandhi Ahmed Patel