The 19-year-old grappler failed to replicate his good performance in the Games so far and slumped to a 0-4 defeat to Jason Whateley of Australia.

GOLD COAST: India secured their first boxing medal in the ongoing 21st edition of the Commonwealth Games, with Naman Tanwar settling for bronze in the men's 91kg category here at the Oxenford Studios on Friday.

The 19-year-old grappler failed to replicate his good performance in the Games so far and slumped to a 0-4 defeat to Jason Whateley of Australia in the semi-final bout to settle for the bronze medal.

Earlier, Tanwar had got the better of Haruna Mhando of Tanzania in a unanimous 5-0 verdict to make it to the last-four of the men's heavyweight (91kg) category. 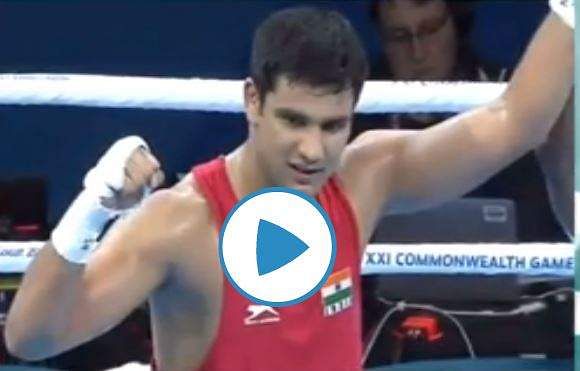 However, the Indian boxers are set to bring more medals to the country as Amit Panghal, Gaurav Solanki and Manish Kaushik have all qualified for the finals after winning the semi-final matches of their respective categories today.

While Amit outplayed Uganda's Juma Miiro by a unanimous 5-0 verdict in the semi-finals of the men's light flyweight (49 kg) category, Gaurav overcame a challenge from Sri Lanka's Vidanalange Ishan Bandara in the last-four stage of the men's flyweight (52kg) division.

Meanwhile, Kaushik also made it to the finals after sweeping aside James McGivern of Northern Ireland in the men's lightweight (60kg) semi-finals.

India's medal tally at the Games has now increased to 35 including 16 gold, eight silver and 11 bronze.