Expecting record figures, BCCI to invite all who have picked up tender papers for IPL media rights when bids are opened on September 4 in Mumbai

CHENNAI: Following Monday’s Supreme Court verdict that IPL media rights be awarded through a normal tender process instead of e-auction, the much-awaited event will be held in Mumbai on September 4. Twenty-four companies have picked up tender papers for the rights to be awarded for five years in three categories — TV rights in India, digital rights and TV rights outside India.

To ensure transparency, the BCCI with the approval of the CoA has for the first time decided that representatives of each of the 24 bidding companies should be present when the tenders are opened. This was not the practice in the past, when it was optional for the bidders to attend. Officials of audit firm Deloitte India and legal firm Amarchand Mangaldas will also be present to address technical points. 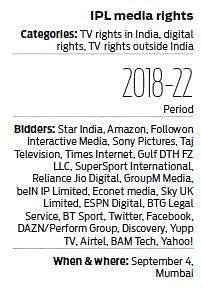 Having sold IPL media rights to Sony for `8200 crores for nine years which expired in 2017, the BCCI is expecting a big rise. Unofficial estimates have projected figures in the region of `20,000 crores. BCCI CEO Rahul Johri, IPL COO Hemang Amin and IPL governing council chairman Rajeev Shukla will be present when bids are opened. There is no clarity yet whether the BCCI office-bearers will also be around.
“There has been a lot of talk about transparency in commercial dealings and other administrative matters. In the wake of all that and to ensure that nobody gets a chance to raise a finger after the process has been completed, all bidding companies will be requested to send a representative when the tenders are opened,” sources in the know told Express, after the Supreme Court bench rejected Rajya Sabha MP Subramanian Swamy’s plea seeking e-auction of tenders and stay on the ongoing process.

With global players Yahoo, Amazon, Facebook, Twitter in fray along with Star, Sony pictures, Taj Television figures are expected to reach an unprecedented high. “Relevant agencies have estimated that each IPL match can be worth `60-65 crore. With around 60 (no of matches uncertain, depending on no of teams) matches, that comes to `3600 crore a year. For five years, this will be `18,000 crores. So projections of `20,000 aren’t baseless,” said sources. The BCCI hopes to make more this year also because the rights have been divided in three parts. Bidders can go for all three or one or two. It’s possible that one company ends up bagging all three and also possible that three of them get one each. “There are global names who want presence in India. For them, IPL is a product that can give them maximum visibility. They are not worried about profits immediately and are willing to spend to get the footprint,” said someone following proceedings.

More from Cricket.
Now we are on Telegram too. Follow us for updates
TAGS
BCCIIPLIPL Media RightsSupreme CourtDigital Rights of IPL