India’s pace contingent of Bhuvneshwar, Shami and Umesh pick up from where they had left off during last home season by claiming all wickets in Sri Lanka’s first innings, a heartening sign for Kohli &

KOLKATA: In the subcontinent, spinners are major wicket-taking weapons for captains, with the conditions aiding turn and variable bounce. However, with India’s long overseas sojourn set to start soon, the Sri Lanka series was seen as an appetiser, with tracks tailored to help seam bowling, as seen on the first two days of the first Test at the Eden Gardens.

However, with the Sun shining brightly and no cloud cover, Sunday was in the batsmen’s favour. With Sri Lanka ending Day 3 on 165/4, the visitors were expected stretch their lead and put the hosts under pressure. Though Rangana Herath’s third Test fifty helped bulk up their lead to 122, what will please the team management is the performance of the India pacers. 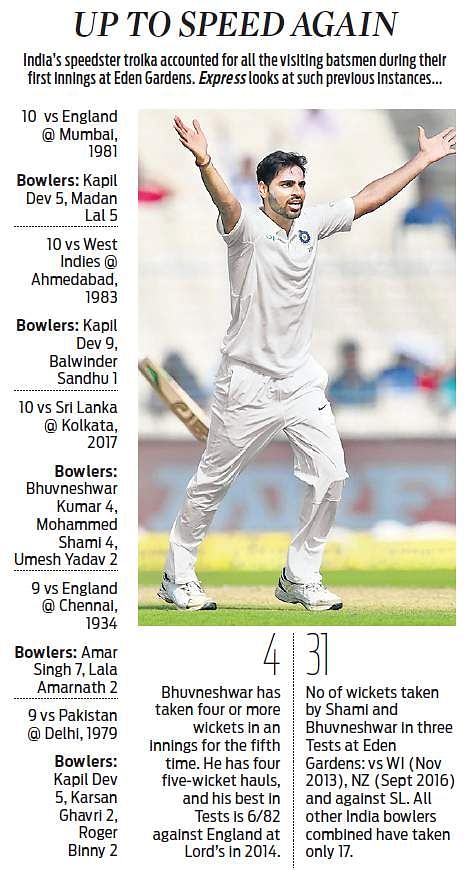 Mohammed Shami, who bowled with venom in Saturday’s final session sans reward, rattled through Sri Lanka’s middle-order to finish with four wickets. Bhuvneshwar Kumar added two scalps to return with 4/88, while Umesh Yadav already had two from the previous day.

“It was much easier to bat compared to the previous days. Credit should go the India pacers for the way they bowled. They made it as difficult as possible,” Herath said at the end of the day’s play.
Incidentally, this was the third time India’s seamers took all ten wickets in a Test innings at home, after a gap of 34 years.

India’s pace battery has continued from where it left off in the last home season. In last year’s Kolkata Test against New Zealand, the conditions where similar. And they did not disappoint, with Bhuvneshwar and Shami sharing 12 wickets. The Meerut lad collected 5/48 in the first innings, as India won and became the numero uno Test side.

The most encouraging aspect about India’s pace battery is that they have all bases covered. Bhuvneshwar can swing the ball at will, Shami has deadly in-swingers, while Umesh is the speedster. The latter has matured a lot, considering that he was the highest wicket-taker among pacers last season. That, and Ishant Sharma not getting a game, despite doing well in the Ranji Trophy.

All this bodes well for Virat Kohli and Co ahead of much challenging contests in the days to come. “Especially in the last few years, Indians have produced some fantastic fast bowlers. The three are top class and you need to be mentally prepared with good skills to tackle them. They can be successful anywhere,” Sri Lanka’s Angelo Mathews had said.

That doesn’t mean that the seamers don’t have chinks in their armour. While they allowed Sri Lanka to take 93 runs for the last three wickets, they were also guilty of trying too hard. Something ‘Bhuvi’ himself added. “We knew our total was less, so we needed to attack. We needed to show a bit more patience. Also the pitch improved drastically, making things difficult. We know things we need to improve upon and overall, we are quite satisfied.”

With sterner tests to come, India will be looking to their pace battery to overcome their niggles and help maintain their status quo of being the top Test side.