The frustrating tale of Shami and fitness

It’s a question the Indian team faces every now and then. Is Mohammed Shami fit? Not that the answer is always ‘no’, but it’s in the negative way too often. Indi­a’s premier pacer misses almost as many matches that he plays.

NAGPUR: It’s a question the Indian team faces every now and then. Is Mohammed Shami fit? Not that the answer is always ‘no’, but it’s in the negative way too often. Indi­a’s premier pacer misses almost as many matches that he plays. 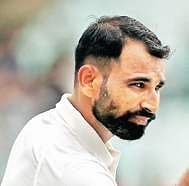 Bowlers the world over who ply this trade are prone to injuries. There is hardly anyone who doesn’t sit out because of this. Making Shami’s case different are the numbers. Since debut in November 2013, he has taken part in 26 of the 45 Tests India have played. Mostly, it has been due to lack of fitness. Count IPL, ODIs and domestic matches, his absence becomes glaring. No­t­h­ing was disclo­s­e­­d on behalf of the team Frid­a­y on why Shami is not playing this Test, other than a one-li­ner that “he has a niggle”. Given that in the past he has suff­ered from problems in the knee, si­­­des and hamstring, this can m­e­­­­an any of those or something new.

A BCCI-certified physical trainer told Express that the bowler has a deep-rooted problem caused by improper guidance in the formative years. He knows how to bowl well, but isn’t as good when it comes to taking care of his body. “Bowlers like Shami have not been instructed properly in their formative years. So they lack awareness on progression of training, distribution of load and recovery. That’s why they are unable to sustain thems­e­lves for long at the top level. Th­e­ir muscles are not trained that wa­y. You can work on it, but it’s difficult to eliminate the possibility of breakdowns,” said the trainer, who didn’t want to be identified.

It surprised many last year when Shami played the first th­r­e­e Tests against England. As if to prove them right, the bowler mi­s­sed the last two with a kn­­ee pr­oblem. He came back before the IPL and played domestic one-da­­yers, but did not pl­a­y­ in the Champions Trophy. And if in­d­i­cati­ons were good in Ranji Trophy before the Sri La­nka series, he is out again. “Problem is, Sh­ami learned the basics of fitness after he grew up. If a st­udent le­arns A, B, C, D in class VII, he will struggle with English in cla­ss X. His situation is similar. He is still learning. Na­t­u­rally, the le­sson isn’t complete because it sta­rted late. He doesn’t kn­ow mu­ch about, load management, re­st and recovery,” said the tra­­­­iner.

Because he can bowl above 140kmph and trouble batsmen, Sh­ami will still be given time to get fit. But with new faces comi­n­g up and fitness non-negotiab­le, time is running out for one of India’s best pacers in recent times.