With Ranji Trophy round the corner, pace-bowling all-rounder S Abhishek Tanwar knew he had to raise his fitness standards in order to be in contention.

CHENNAI: September was one of the worst months for Tamil Nadu pacers. The side lost their top two pacers in K Vignesh and T Natarajan, with Aswin Crist still to fully recover from injury. With Ranji Trophy round the corner, pace-bowling all-rounder S Abhishek Tanwar knew he had to raise his fitness standards in order to be in contention.

And he did exactly that after a successful Tamil Nadu Premier League (TNPL) stint this year, finishing as the leading wicket-taker with 15 scalps for Siechem Madurai Panthers. After a two-week selection trial, Tanwar earned his maiden Ranji call-up. 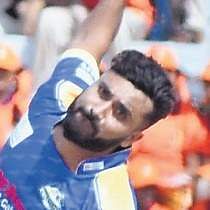 “I felt I was not up to the mark. So I spent extra hours at the gym. When you improve physical fitness, you also feel mentally stronger. When I came to know that the main bowlers were ruled out, I had a feeling that I might get the nod,” the 27-year-old told Express.

The first-choice pacer for the Baba Indrajith-led side will be M Mohammed. With J Koushik and all-rounder Vijay Shankar in the mix as speedster options — not to mention Washington Sundar’s handy batting and off-spin — breaking into the XI won’t be easy. “Vijay and Washington are India internationals. To compete with them, I need to raise my standards. Their presence will motivate me,” said the Haryana-born pacer.

Tanwar, who plays for Grand Slam CC in Tamil Nadu Cricket Association (TNCA) First Division league, says that playing three-day games for the past four years has helped him adapt to the longer format. Tanwar has also been working on his batting for Ranji Trophy, with particular emphasis on defence.
“I am a bowler who can bat. Sometimes, you need to curb your instinct and play according to the situation. While bowling, you need to do so consistently at one length, unlike T20s.

Playing in the first division has helped me shift gears from T20s. Since these are four-day games, I’m also working on my defence.”
Tamil Nadu will play against Madhya Pradesh and Hyderabad in Dindigul and Tirunelveli. Having played at these venues before in TNPL, Tanwar is confident of starting on a positive note. “Wickets are more or less same in Tamil Nadu. We know what we need to do to succeed in home matches. I’m hopeful of using those conditions to our advantage.”
srinidhi@newindianexpress.com

Stay up to date on all the latest Cricket news with The New Indian Express App. Download now
TAGS
S Abhishek Tanwar