Next India coach to be announced on August 16

Along with the six candidates for the post of chief coach of the Indian team, applicants for the assistants’ roles are also expected to be interviewed on August 16.

NEW DELHI: August 16 will be a busy day at Cricket Centre in Mumbai. Along with the candidates for the post of chief coach of the Indian team, applicants for the assistants’ roles are also expected to be interviewed a day after Independence Day. Only the name of the person selected as chief coach is likely to be announced on that day.

There was no announcement after Tuesday’s meeting of the committee of administrators (CoA) in Mumbai on the dates. It was learnt unofficially that the interviews will be held on August 16. There are six candidates for the coach’s post, including incumbent Ravi Shastri, Australian Tom Moody and former Kiwis coach Mike Hesson. Former India players Vikram Rathore, Sunil Joshi and South African Jonty Rhodes are in fray for the roles of batting, bowling and fielding coach, respectively. 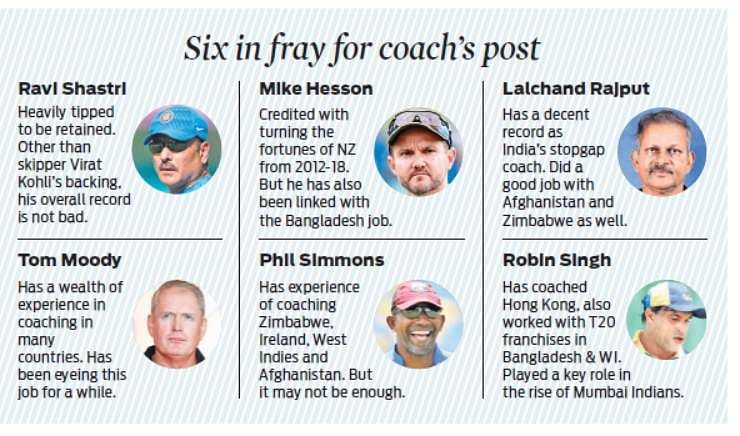 While a Cricket Advisory Committee (CAC) will select the chief coach, aspirants for the posts of assistants will be chosen by the national selection committee headed by MSK Prasad. Some of the applicants will appear in person. Some like Shastri himself would link up through Skype. The chief coach part is expected to be done away with on August 16 itself. Names of the other persons selected may be announced next week.

“Things have more or less been finalised. The CoA is detached from the process of selecting the coaches. That responsibility has already been handed over to the CAC and the selection committee. Once they have chosen the candidates, they will get back to the CoA for approval. But that’s a formality because the decision of these committees will be final, unless there are issues regarding conflict of interest,” said an official after the CoA meeting.

Other than Shastri, bowling coach Bharathi Arun is also expected to be retained. It is speculated that batting coach Sanjay Bangar will face competition. Fielding coach R Sridhar too seems to have made a good impression. But since Rhodes is among the applicants, his reappointment can’t be taken for granted.

Stay up to date on all the latest Cricket news with The New Indian Express App. Download now
TAGS
BCCI India cricket