In their fourth game this season, against Tuti Patriots on Tuesday at ICL ground, the crowd witnessed skipper Babab Aparajith notching up an unbeaten 76.

TIRUNELVELI: There is something about the No 3 and Kanchi Veerans. The batsmen in that position have been firing in every match.

In the first game, it was S Lokeshwar who hit 51 in a losing cause. In the second, Sanjay Yadav fell five short of his maiden century. The third game saw skipper Baba Aparajith making a 41-ball 44 after the team lost two early wickets. The fourth, against Tuti Patriots on Tuesday at ICL ground, witnessed Aparajith notching up an unbeaten 76. The knock with R Sathish’s heroics at the end helped them thrash Tuti by 58 runs while chasing 194. 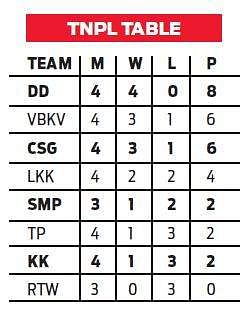 “The way we bowled and fielded, even 180 wouldn’t have been enough. It is just a mental thing, not skill-based,” the captain had said after the team’s loss against Kovai Kings.

It is not the first instance of him talking about having an uncluttered mind. Averaging 44 in the tournament,he is known to play according to the situation. Be it long format or short. And it was evident that his men entered the field with a clear plan that handed them their third straight win. Opener S Siddharth provided the start with a 38-ball 50. Aparajith consolidated with his sixth fifty and Sathish gave the finish with a 47 not out off 19.

Kanchi were also helped by some sloppy fielding and poor bowling. Aparajith, after being dropped twice on 10 and 28, made sure the team set  a stiff target. There was never a phase in the first innings when the run rate dropped below seven, courtesy his striking ability. The 25-year-old first stitched a 71-run partnership with Siddharth for the second wicket before sharing an unbeaten stand of 77 runs with Sathish.

But it was the final five overs which handed them a big total. After Yadav was dismissed for a 12-ball 14 in the 15th over, Sathish, with his strong bottom-hand, hit four massive sixes apart from three fours. The 38-year-old was severe especially against pacer Athisayaraj Davidson as he scored 24 runs off five balls in the 18th over.

Barring the opening partnership which has been Kanchi’s weakness so far - only once in four times the opening partnership has crossed double digits — they have been firing on all cylinders and look certain to make it to the playoffs. The only silver lining for Tuti was leg-spinner A Venkatesh’s performance who finished with figures of 2/18.

Chasing a mammoth target was always going to be challenging for Tuti. Kanchi were on the money straight away. Pacer Thamarai Kannan triggered the collapse by removing opener Akshay Srinivasan and captain V Subramania Siva for 22 and three respectively. They were 59/5 inside 10 overs and the game was all but over.