Thronged by those from the elite circles of Delhi, Roshanara Club invokes images of cricket during the Raj and has tales to tell of BCCI’s origin.  Atreyo Mukhopadhyay fleshes out how the prestigious

It’s easy to miss the sense of history if you are a newcomer and driving in. Chances are also high that from a cab, it will be difficult to fathom the vastness of the surroundings. You will notice some greenery around after snaking through the lanes on the approach to the entrance, but the sight of swanky cars heading in and out might cause a delay in realising that the place you are about to enter sits in the middle of acres, where constructions are few and trees aplenty, attracting a variety of birds.

Roshanara Club is a prestigious hotspot for North Delhi’s elite. Activities revolve around sports and pastime. Formed in 1922 by British industrialist Grant Govan and a group of affluent Indians, this sprawling space with facilities for about 10 disciplines — including cricket and tennis — is spread over 22 acres. Exclusive for members, for whom it is a matter of great effort and greater pride to secure membership, this club is better known as BCCI’s birthplace. Govan was its first president. It was the winter of 1928, and legend has it that the brainstorming happened at a bar by the fireplace.

That fireplace cannot be located, but it’s possible to imagine how it was if one takes a walk through the lounge of the single-storied central building, which is largely empty at 10.30am on a weekday. The members have left after their morning walks and cups of tea. The tall doors, carved pillars, some of the furniture and the prevailing quiet hint that there are stories scattered around.

There are narrow, long cabinets with trophies and memorabilia signed by big names. At a corner by the ground is a scoreboard mounted on a small pavilion “presented to Roshanara Club” by the Maharaj of Vizianagaram in 1930. The match to mark its opening had pitted a Rest of India side against a Vizianagaram XI featuring Jack Hobbs and Herbert Sutcliffe, the first famous opening pair in Test history. This game finds mention in the archives as a first-class fixture won by the Maharaj’s team. CK Nayudu, Mushtaq Ali, Amar Singh and the Maharaj himself were among the players. Taking 6/66 in the first innings for the losing side was Anthony de Mello, the first secretary of BCCI.

Situated opposite the garden named after Shah Jahan’s daughter Begum Roshanara, this inviting expanse occupies a unique place on the country’s diverse cricket map. It does not take part in the local league and is not known to be a cradle for talent. The contribution of this club to the development and evolution of the game is different from the institutions known more for helping youngsters learn the basics.

For nearly a century, Roshanara Club has played a pivotal role in sustaining interest in cricket and raising its standard by providing quality playing conditions. Starting with an unofficial Test in the British era and many more games involving the early stars of Indian cricket, it has been a regular stop for Ranji Trophy over decades and a favourite destination for cricketers across generations. Although never a venue for official international matches, for many players it was and is a place unlike any other. Apart from first-class facilities, ambience is a major reason for this attraction.

Looking for a location for a sequence with cricket in the background for the film Gandhi, director Richard Attenborough had zeroed in on this place. The film released in 1982. “We joined in as fielders or spectators. Shooting took place over two, three days. In the movie, this part appears for just a few moments,” recalls Rajesh Jain, a member  of the club for nearly four decades who was also among the extras.

The club has retained the proverbial old-world charm and semi-sylvan settings that might have prompted Attenborough and his crew to stop looking for other spots.
From the far side of the ground opposite the clubhouse, it becomes easier to understand why it is widely regarded that Roshanara Club reflects better than peer establishments the mood associated with bat and ball those days. A semi-circular line of low, white structures with stretches of long verandas provide accompaniments like food, drinks and sought-after company. Flanked by trees, they also form a classic backdrop for a panoramic picture of cricket during the Raj. 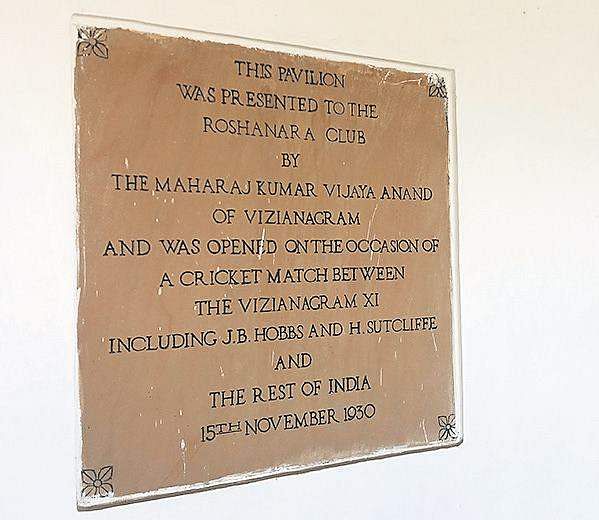 In a jump cut of sorts, the walk across the ground to get a view of the central building dating back to inception brings one back to the present. There are men at work with sophisticated maintenance equipment. The green is devoid of bald patches. And there are other signs like practice nets and a supper-sopper, suggesting that facilities here have been consciously upgraded.

This leads to the second half of the Roshanara story. Concurrently with preservation of legacy, this club has stayed in sync with changing trends. It has floodlights, a renovated dressing room and a coaching programme for children. The ground is rented out to corporate firms and other entities on weekdays. It’s in demand and bookings are difficult during the season. In the process of keeping pace with time, authorities have introduced the Roshanara Premier League, an IPL-style T20 escapade for members and their relatives. Featuring nearly 130 players in eight teams, with qualified umpires hired for duty, it has completed seven years and become a hit.

“One has to keep upgrading. Members want modern facilities,” says club president Deputy Chhatwani. “The focus is on sports and we make a lot of effort to ensure that kids who come here get everything. We have floodlights for all the tennis courts as well.”This infrastructure demands attention towards upkeep. “There are separate committees to look after each sport,” informs Vijay Aggarwal, chairman of the cricket committee. “There is the Roshanara Cup, a corporate event. A T10 competition has also been launched. Coaches are hired to train kids. There is a team of around 12 persons with a trained head, to maintain the ground.”

Around `12-15 lakh is spent annually on cricket to keep things running. Tennis and table tennis tournaments also draw a good number of participants. There are synthetic and grass courts, apart from clay, and an artificial turf for five-a-side football.A late afternoon offered glimpses of how the set-up treats its cricket. Kids in whites were going through training rituals under the observation of coaches. Once they finished, the grown-ups took over for a practice match. It was to take place under lights. The scorer hired for this game was a retired person who has done this job in Ranji Trophy. The participants looked like a mix of regular players and not-so-regulars. Regardless of the amateur status of activities, it seemed that there was no dearth of seriousness.

“That’s what defines this club. Cricket is taken seriously and every detail is taken care of. The pitch is usually lively and touched up every year. The outfield is comparable with international venues,” says Jaagrit Anand, who represented Delhi in 25 one-day and T20 matches from 2012-15. “What makes the experience special is the aura and sanctity of the place. I grew up hearing those and saw as a kid Manoj Prabhakar, Raman Lamba playing here. You get those vibes when you walk into this ground. You feel like a cricketer.”

The left-handed batsman with an average of 45.62 in the one-dayers is a Roshanara product, in the sense that his primary education in cricket happened at the club under Dronacharya award-winning coach Gurcharan Singh. Being the son of a member, Anand played here and took part in tournaments. At 14, he went out to get Virat Kohli’s coach Rajkumar Sharma’s tutelage, and got hardened as a cricketer by playing in age-group tournaments, conducted by Delhi and Districts Cricket Association and BCCI.
In what Anand still considers his alma mater, he notices a surge in activities.

“If the number of those playing cricket seriously was 15, it has gone up to 150. The coaching programme lays emphasis on technique.” The 29-plus is not the only one from Roshanara to have made it to the national circuit of late. Vinayak Gupta is a batsman who represented Nagaland in BCCI’s U-23 tournament this year. He too learnt his early lessons here.

This diversification of priorities and early signs of a supply line have been among the significant changes that Roshanara has seen over the years. The place known more for providing idyllic settings for cricket has retained its charm and started playing a more proactive role in contributing to the development of cricketers.

“Activities were mostly leisurely when I started frequenting,” says Jain. He played for Sonnet Cricket Club, famous for nurturing well-known players. “When we played here, it was generally for fun. Beer and continental dishes were the attractions in the evenings. The average age of the players was around 40. Gradually, we have become more professional about our cricket. The approach to activities has changed.”With its centenary coming up in three years, Roshanara Club heads towards the milestone rich in history, and a dash of fresh energy to chart a new course.

member rights over board games
A Ranji Trophy venue for many years, Roshanara Club has stopped hosting BCCI matches. The board’s playing conditions and anti-corruption norms demand separate dressing rooms for teams and a players’ area that others can’t access. Authorities are okay with the first, but unwilling to restrict movement of members inside the club. So it has chosen to not stage matches conducted by BCCI.

early lessons, first-class
The match to inaugurate the pavilion donated by Maharaj of Vizianagaram was played in 1930 between his XI and a Rest of India XI. It was accorded first-class status. Jack Hobbs and Herbert Sutcliffe, one of the most successful opening pairs in Test history, played this game. They averaged 87.81 runs with 15 century stands in 38 innings. Hobbs still has the most first-class tons (199).