An icon of women’s cricket and inspiration for many, speedster Jhulan Goswami talks to Atreyo Mukhopadhyay about missing Test cricket, India’s pace battery and the next World Cup...

Jhulan Goswami is one of the most remarkable cricketers to have represented the Indian women’s team. That’s because she is a rare fast bowler to have emerged from the country, who at her peak was also among the fastest in the world, if not the one. On the last lap of a striking career which has seen her become the highest wicket-taker in women’s ODIs, the player turning 38 in November had a chat with The New Indian Express on various topics.

You have won accolades like ICC Player of the Year, Padma Shri and Arjuna. How different or special is to win the respect of opponents, who say you were the fastest they played against?

When you are doing a job like ours, sometimes you draw applause. Sometimes you don’t. So recognition is not the most important. When playing for the country, you are given a role. There are certain responsibilities and the team expects something specific from you. How you fulfil those is what matters. There are plans. Executing them with all sincerity is the challenge. When you are doing these things, wanting to do it and thinking how to do it better, things like recognition cease to matter. It is possible that I got more success because I strove to surpass myself and perform beyond my abilities. That is what I have always done and that is what I will do for as long as I play the game. Maybe, that’s why I got noticed more often.

Being a fast bowler on unresponsive pitches, going through hardships when there was no immediate reward in sight and doing it for so many years — what kept you going?

If you look at the current crop of fast bowlers in the men’s team, they as a group clock 140kmph at home and when playing abroad. They also grew up on pitches that I did. So that’s not necessarily an impediment, if you really want to do what you love doing. There was a time when pitches were not conducive for bowlers like us, but domestic cricket has changed. You get all sorts of tracks these days, from flat to hard with true and even bounce. I got hooked onto fast bowling watching others. I used to imitate whom I saw on TV — Kapil Dev initially, then Javagal Srinath, Glenn McGrath... My height helped. But I also made sure that I followed what my coaches and seniors said. Maybe, what I did different was I wanted to get as close to perfection as possible, rather than just doing it. The flip side of doing this as a quick bowler is injuries. The body gives in at times. I’ve had to miss matches and tournaments. If this is called working hard, I did it. But you have to do that in many other walks of life. When you follow your passion, it doesn’t feel like hard work.

Being a role model for fast bowlers and medium-pacers in women’s cricket, how does it feel to see the current Indian team rely mostly on spinners?

This is up to the team management. They think spin is our best bet at the moment. Strategies are made accordingly and the combination is based on that. They have seen that spin is our best weapon to counter the opposition. And this plan has given us success. We reached the T20 World Cup final winning all the matches on the way. I would say, because Plan A worked throughout the competition, Plan B was not required. It doesn’t mean we don’t have good medium-pacers in the next lot. Shikha Pandey, Mansi Joshi, Arundhati Reddy, Pooja Vastrakar are all very promising. They have done decently when given the opportunity. Importantly, they are serious in training and working hard in order to be ready for the opportunity as and when it comes.

You grew up playing with the red ball, used red and white for a while before women’s cricket became white-ball only. As a bowler, how was this transition?

Making adjustments is a part of this game. When we started, there was no T20. We had to make the change after a certain age. Now, everybody has got used to it. Similarly, I was accustomed to the red ball and hardly played with a white ball for some time. When that became the norm, we had to study how differently a white ball swings, how to play and how to react to it. You can’t help it. So we had to change with time, prepare and plan differently. It’s all about adapting. It’s like playing on a seaming track after playing on spinning tracks. The one who adapts better, stands a better chance of succeeding.

You have an impressive Test match record and played a crucial role in Test wins in England. Do you miss playing Test matches?

For every cricketer, Test matches or multi-day games are the ultimate test. Without a doubt, this format is the most challenging because of the effort it demands. Like bowling the last spell of the day, after standing there for long hours. Or a passage of play in the fourth innings which is going to determine the outcome of the match. You are tired but still trying to give your best. It’s the real test because that’s when you have to synchronise the body and the mind. Playing in whites with red balls has a different kind of charm as well, which can’t be matched. Unfortunately, we don’t play this format any more. The ICC has a plan for women’s cricket where ODIs and T20Is are priority. And it’s a good plan I must say. So we have accepted it, although there is no denying that we all miss playing the longer format. 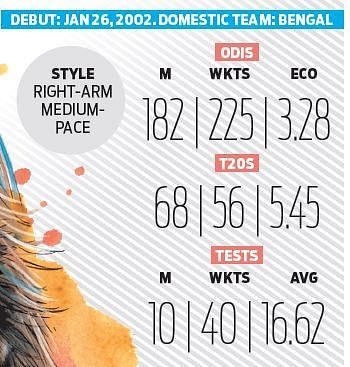 There have been many memorable moments. If you pick one or two, which would be those?

When you play for such a long time and be part of some victorious campaigns, it’s difficult to choose. There are quite a few memorable moments actually, when we did well as a team. Reaching the 2017 World Cup final, beating Australia and New Zealand. The 2007 quadrangular series as well. But because Test cricket is so important for me, I would say the 2006 win in England was very special. That was our first Test series win in England. To have contributed to it and also in the 2014 Test win in England occupy a special place.

You are a handy bat and average above 25 in Tests. Both your Test fifties came in England. Spearheading the attack, do you think your batting got neglected?

I wouldn’t say that. I tried doing my best in whatever role I was assigned and whichever number I was sent in. The goal was to contribute in every possible way. Batting was a different challenge and I faced it with the best of my abilities. In the end, I am happy if I have contributed to the team’s cause. There are no regrets as long as I am convinced that I did the best that I could have.

In the last leg of a long career, a World Cup next year and activities restricted due to the lockdown... How are you coping?

I don’t think it will take long to be back in the groove once we start full fledged training and hit the ground. I’m sure the BCCI will organise training camps and practice matches because we need a bit of time to prepare individually and as a team. We are doing workouts at home and following routines, monitored by the team support staff. Obviously, that’s not enough as we all need to be back on the field. But getting back in shape shouldn’t be a problem.

ICC Women’s Player of Year in 2007, when no Indian male player bagged any individual award.

Stay up to date on all the latest Cricket news with The New Indian Express App. Download now
TAGS
Jhulan Goswami