100 not out: Pacer Ishant Sharma set to play his landmark Test in Ahmedabad

Even if Ishant Sharma burst into the limelight as the ‘next big pacer’, his career is a tale of two halves.

CHENNAI: Ian Botham, Kapil Dev, Courtney Walsh, Wasim Akram, Shaun Pollock, Glenn McGrath, Makhaya Ntini, Chaminda Vaas, James Anderson, Stuart Broad. On Wednesday, Ishant Sharma will join this illustrious list of pacers who have played 100 Tests. With an average of 32.22, he would be the odd man out in that club, but with Ishant, numbers don’t often tell you the story. 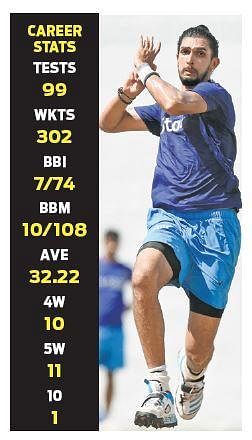 Even if he burst into the limelight as the ‘next big pacer’, his career is a tale of two halves. In the first, you kept waiting for him to mature into the pacer India wanted. In the second, he has become the leader of the pack who does the job when ever the captain throws him the ball. From a 19-year-old who made Ricky Ponting hop, Ishant has come a long way. He is now part of a core group of pacers who can be lethal across conditions. We take it for granted now that pacers coming through the system will be as good as the ones we have at our disposal currently: Jasprit Bumrah, Mohammed Shami, Bhuvneshwar Kumar and Mohammed Siraj just to name a few. All of them excite for different reasons.

In 2007, when Ishant came through, it was different. You’d seen the likes of Irfan Pathan, Munaf Patel, RP Singh impress you before fading away from the Test arena. With Zaheer Khan around, India could afford to invest in Ishant especially when they had very limited options to choose from.

That it took Ishant way too long to find his feat is a different thing, but right through his career, he has soldiered on, merely following what he is told to. Remember Lord’s 2014? MS Dhoni wanted Ishant to bowl short-pitched stuff, only for the pacer not to be convinced in the first place. It was only after Dhoni set the field that Ishant started bowling bouncers, bowling India to a famous victory. “It is difficult to say who (captains) understood me the most as all of them understood me really well. But more than the captain understanding me, it was always important as to how I understood the captain. What does the captain want from me specifically. If those things are clear, communication becomes easier,” Ishant said.

Today, Ishant is probably at the peak of his career. Like with Zaheer, a county stint has made him a complete bowler, one who understands his body more than ever. Over the last few years it has become a non-negotiable for Ishant, however boring the drills are. Even if support staff allow him to have a cheat day, Ishant sticks to his diet. “I learnt a lot from Zak. Especially his work ethic. He always used to tell me how important fitness is for a fast bowler. That’s what I kept in mind. That’s what I tell everyone in the team: keep working hard on your fitness and I am sure you will play longer,” Ishant said.

At 32, it is hard to say how long Ishant will last. In fact, even he refused to get beyond one Test at a time. On a day where he said numbers don’t matter to him, Ishant cared only about one. “I have only one format to play, so the WTC is like a World Cup for me. If we reach the final and then go on to win it, it will be the same feeling as winning the ICC World Cup,” he said. Trust Ishant to give everything he has to take Inda to that final.

Now we are on Telegram too. Follow us for updates
TAGS
Ishant Sharma