Tibet's women's football team: The story of the snow lionesses

Tibet’s women’s team, with some players who have had to cross the Himalayas on foot, are using football to rise above all their limitations, as Vishnu Prasad finds out

For most of the world, Tibet is a historical entity, a country that stopped existing in the 1950s when the Chinese marched their ‘liberation’ army to the roof of the world. Yet, when Ngawang Oetso takes to a football field with ten of her compatriots, Tibet is suddenly wrenched back into existence. The scoreboard simply reads Tibet. No asterisks, no brackets.

Oetso is sixteen and, like most Tibetans of her generation, has not seen her country. Yet, she is a part of Tibet’s women’s football team, travelling to whatever part of the world would allow them in, acting as an ambassador for her people and playing football.

Tibet’s relationship with football goes back to when its people still had a country to call their own. There are multiple accounts from 1936, of a team of visiting British officials playing a series of matches against an outfit named ‘Lhasa United’, a mishmash of native Tibetans as well as players of Ladakhi, Sikkimese and Nepali origin. 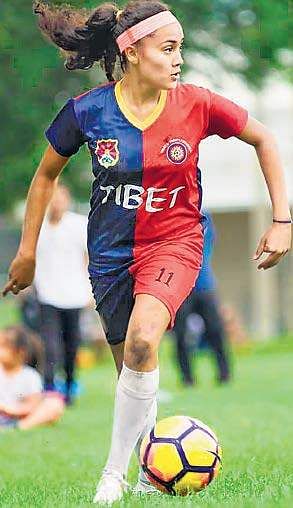 An account by Freddie Chapman, private secretary to the then British political officer in Tibet even has an amusing anecdote about how the series came to a conclusion. “Things proceeded happily for several weeks until some wandering rogue stole our goalposts for firewood,” he wrote in an account of his travels.

For the story of their women’s team though, one has to travel nearly eight decades forward. The team is the brainchild of an American Cassie Childers, who after attending an exhibition on Tibetan football, realised that it was all about men. A month later, she had an invitation from the Tibetan National Sports Association to start a women’s football programme. That was in 2010.

In the eventful journey since, the team has represented their country in Germany, played their first full-fledged international game in Canada and had visas denied to travel to the US, presumably entangled in the delicate diplomatic equation between them and China. It has often cut across geographical barriers to bring players together — the team has found players from Dehradun, Dharamsala, Arunachal Pradesh, Delhi and Nepal.

Of course, no account of these young women will be complete without a mention of where things stand — somewhere between uncertain and murky. There is an ongoing tussle between the Tibetan National Sports Association — the body which runs all Tibetan Sports — and Childers’ Tibetan Women’s Soccer with both parties having less than pleasant things to say about each other. For a measure of how confusing things are, an organisation called the Tibetan Feminist Collective had to issue a statement saying that it would not be issuing any more statements on the dispute, until they had ‘more information and a clearer picture’.

The women themselves shy away from interviews, with those who are willing to speak putting forth a condition that they’ll only talk about ‘what they’ve done’ rather than ‘what is going on’. But compared to crossing the Himalayas on foot, being cut off from their families for years and being denied a country their entire lives, uncertainity over their footballing futures must surely feel like a blip than a crisis.

“When I pull the jersey on, I know I am representing my country,” says Oetso.
The country, she represents though, is limited to her imagination. Oetso was born in Clement Town, a refugee settlement in Dehradun where the team is headquartered. “I imagine it would be cleaner,” she says. “With fresher air.”

The uneven ground at the Nehru Memorial Foundation School, where the team assembles for practice for two months every year, is where she started playing football. “When I was a kid, all my friends were boys. They played football, so I played too,” she says.

Not everyone in the team shares Oetso’s story though. Yangdan Lhamo fled Tibet with a bunch of strangers in 2003, when she was just eleven. The journey on foot across the Himalayas took her a month and one week. “We travelled at night and slept during the day,” she says. “Otherwise, the Chinese army would have spotted us. We ran out of food towards the end.

The last one week, we had just water.” After arriving in India, Lhamo did not get to speak to her family back in Tibet for another three years. Now she tries to keep in touch via WeChat, ironically China’s most popular messaging app. “They were willing to send me away, because they knew there was nothing for me in Tibet,” Lhamo says. “I don’t remember much of that life, honestly. But I never went to school there. Here I got to have an education and a future.”

Lhamo’s friend and teammate Choezom undertook a similar journey two years later for very similar reasons. Now she is a geography student in Delhi, a future she could not have dreamt of, had she stayed behind in Tibet. “My parents and relatives back home, they know I am playing for Tibet. And they are happy,” says Lhamo. “I want to visit them some day. But I don’t want to live there. Not when it is like this.”

One of the complexities of being a national team without a nation in the strictest sense of the word is that you’re not welcome in most places — it’s just too much of a hassle classifying you. Most members of the Tibetan women’s team have no passports. They carry something called an Indian Identity Certificate, something that the Tibetans call the ‘yellow book’, owing to its distinctive cover. That can only get you to so many places.

Earlier this year, the team was invited to attend the prestigious Dr Pepper Dallas Cup in Texas, that featured youth teams from the likes of Manchester United and Everton. Just as the excited bunch were packing their bags, they were denied visas.
“Most of the girls were crying,” Lhamo says. “They were shattered. But we could not understand what US officials were doing. This is sports. We thought the USA was a big country with educated people. But they were acting like a small country.”

But compensation arrived just a few months later in the form of an invitation to the Vancouver International Soccer Festival. Event that was not without hurdles. The festival’s organisers had to cut ties with Canada Soccer because the latter objected to the team’s inclusion.
But once they were finally there, the team played matches against the women’s teams from Canada, Portugal, Iran and Poland — their first full-fledged, albeit unrecognised, friendlies. It is a feeling that Oetso struggles to put into words. “I felt something from the inside, you know? Like we were doing something important.”

But an arguably more important goal was scored a couple of years before when a bunch of the girls travelled to Germany for a football festival. There they ran into the Chinese contingent.
“We did not know that there was a Chinese team coming,” Lhamo remembers. “We were standing near the ground when we saw them getting down from their team bus. So we went up to them, shook their hands and greeted them with hugs.

They had no clue that the Chinese army was occupying us. They asked us ‘If you’re Tibetan, why are you coming from India?’. All they knew was what the Chinese government was telling them. Even after we told them what was going on, they were asking ‘are you sure?” Lhamo says.
“They are not bad,” she says. “The Chinese people are not doing anything against us, it’s their army and the government. We don’t hate them.”
Tibet 1, China 0.