Renovated, Salt Lake all decked up to welcome future stars at City of Joy

From staging multiple Kolka­ta derby matches to playing host to Lionel Messi-led Argentina, the Salt Lake Stadium has had qu­ite a few marquee events to its na­me.

CHENNAI: From staging multiple Kolka­ta derby matches to playing host to Lionel Messi-led Argentina, the Salt Lake Stadium has had qu­ite a few marquee events to its na­me. Now the stadium is set to add another jewel to its crown. Hosting the FIFA Under-17 World Cup in the city mad for the beautiful game!

The stadium has undergone a sea of change.

Renovation works started on February 1, 2015, and according to Javier Ceppi, tournament director of the LOC, the revamped stadium is at par with any world-class venue that has hosted a FIFA World Cup final.

“We have given it a 10 out of 10 rating. We have to thank the West Bengal government for co­mpleting the work in the stipula­ted time. The stadium has been ha­nded to FIFA and only about 2 per cent of work remains to be co­mpleted,” he said. Work on outer areas like a subway, the Media and VIP Tribune are among other things that are in progress.

Once the largest stadium in As­ia with a capacity of 1,20,000, the stadium can house around 80,000 now with bucket seats in pl­ace throughout.

“Keeping in mi­­­nd the security concerns, the ca­­pacity has been reduced to 66­,687, after FIFA enforced a guidel­i­ne following a study with the Sports Grounds Safety Authority of the UK,” Ceppi added. That has been done to ensure complete evacuation of the stadium in eight minutes.

The dressing rooms and bathrooms have been upgraded to make it fit for FIFA standards.

“The dressing room sports a sw­anky new look with two rooms ca­pable of fitting 25 players while two have space for 23. Washrooms have been split into two separate areas: dry and wet,” an official in­charge of the stadium said. The overall cost of renovating the stadium has been close to Rs 100 crore.

The artificial turf at the stadium has been replaced by an all-natural grass pitch. The relaying work for the FIFA-approved turf was done by the same company that had laid the pitch at the Sree Kanteerava Stadium in Bengaluru.

“The new grass is from Reive­ra Bermuda seeds procured from the USA and below it there are two layers of sand (300mm) and gravel (100mm). The next layer is fitted with perforated pipes so that water-logging won’t be an issue,” Amit Malhotra of Spo­­r­ts Tu­rf and Golf Enterprise told Express. 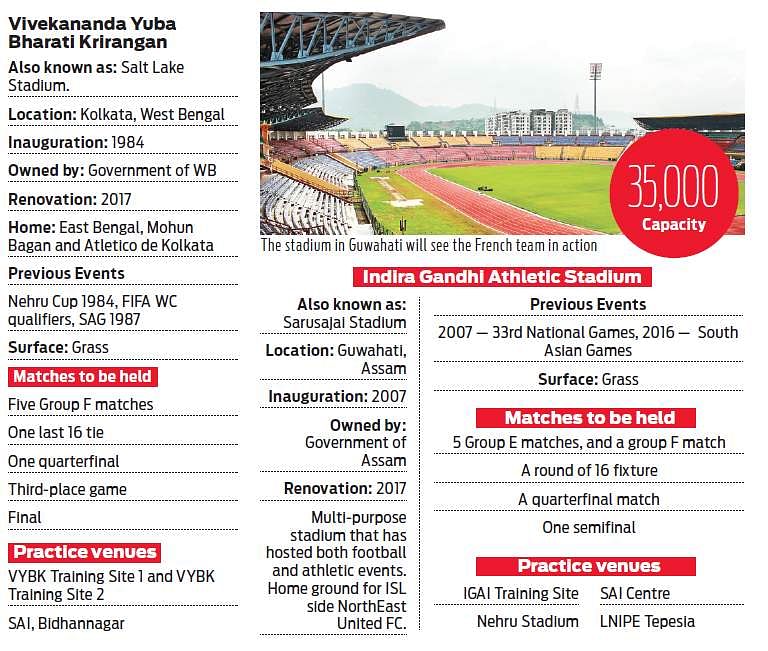 Now we are on Telegram too. Follow us for updates
TAGS
Salt Lake Stadium Kolkata Yuva Bharati Krirangan Under-17 World Cup