Almost heroes: The ones who didn't make the cut for U-17 FIFA World Cup

For a bunch of kids, the U-17 World Cup was an experience they will carry with them for the rest of their lives. For the hundred who did not make the cut, it was all about coming to terms

Anyone with a passing interest in Indian football would know Dheeraj Singh Moirangthem and how his saves lent an air of respectability to India’s maiden World Cup sojourn. Everyone knows how Sanjeev Stalin’s corner was headed in by Jeakson Singh and how Komal Thatal had his fifteen minutes of fame. Everyone knows India’s World Cuppers, the nothingness they came from, and their struggle and sacrifices.In an interview just before the World Cup started, the team’s COO Abhishek Yadav estimated that they must have looked at around 14,000 kids over four years.

For most of those kids, the journey was a half-a-day long, a trial or a kickabout. Some spent years with the team, exiting the system just when the fruit of their labour was almost ripe for picking. No one raves about them on social media, they’re never linked to Manchester United and they never shook hands with the Prime Minister.

Aman Chetri remembers the game like it’s yesterday. It was against Bahrain, in the AFC U-16 qualifiers, back in 2015, the first competitive international game that any of India’s future World Cuppers would play. “I scored two goals as well,” he laughs. There’s another game that Aman remembers, but this time his eyes fail to light up. Even if he doesn’t care to recollect it, YouTube still has it in its entirety. It’s India against Belarus in the second game of the 2017 Granatkin Cup, the tournament that would eventually cost then-coach Nicolai Adam his job. Around the half-hour mark, Aman tracks back, deep inside enemy territory and, in an attempt to retrieve the ball, clatters into a Belarusian defender, right in front of the Indian bench. Both he and his intended victim go down in a heap. Everyone on the Indian bench looks on. 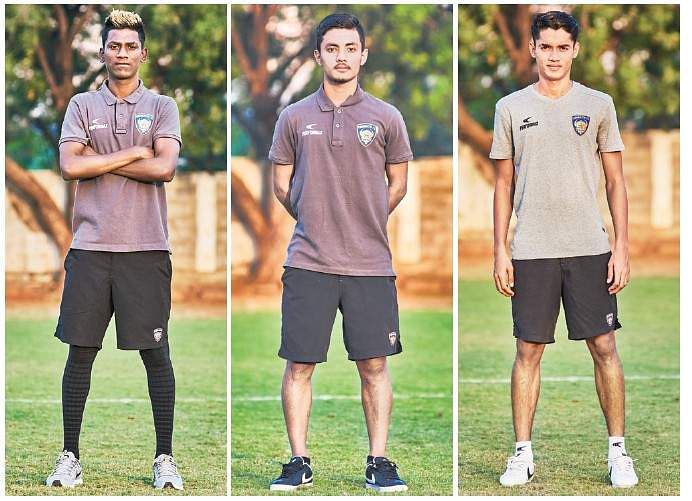 Then the Belarus boy gets up. Aman doesn’t. Three players spring up from the Indian bench at the same time. Two of them support Aman as he limps off the field. That was the moment his World Cup was over. Ten full months before it began.It was a cruel blow for the kid everyone assumed would be India’s breakout star of the U-17 World Cup. The nippy forward was one of the first names on Adam’s teamsheet and repaid his manager with goal, including one in the 3-3 draw against Saudi Arabia in the 2016 AFC U-16 Championships — arguably the high point of Adam’s tenure.

“That was not even my first knee injury,” Aman remarks. “I had a meniscal tear on my other knee in the year before. I had rested for a few months, then had a surgery done. But I was back to playing within a month. That was different, it was minor.” There was nothing minor about this one. He had torn his Anterior Cruciate Ligament and was going to be out for at least seven months. “After the first one, my mother used to tell me to be careful, don’t get injured again,” he says. “Initially, I thought I was going to make it. But I guess it was too late.” His voice trails off just before the last word.

When his friends were making history, Aman was picking up the pieces and trying to put it back together. Just before the World Cup, he started training with Ozone FC in Bengaluru and then made the switch to Chennaiyin FC to play for their B team. He was in ninth grade when he was first called up by Adam three years ago and his mother began fretting about his studies. He still hasn’t given his tenth.
But does he think of the what-ifs? What if he hadn’t clattered into that Belarusian defender that day? What if he had gone in a bit lighter than he had? “That’s how life is,” he shrugs, he repeats — a line that has figured multiple times in our conversation. It’s a life lesson no kid his age should have to learn. At 18, that is most definitely not how life should be.

Saurabh Meher doesn’t really want to talk about it.
There are long awkward pauses between questions and answers and most of the latter is ‘just like that’ or ‘I don’t know’. Even his memories of the day he was told of his exclusion, the day India’s final World Cup squad was revealed, is devoid of details. “They told us that we were out. Then the rest of them went for practice. I did not feel like talking to anyone, so I slept. The next day, I went home.”
His disarming smile and his non-committal answers don’t give away much but the there are hints of the trauma it caused him, especially when he allows his mind to wander off. “Unlike the others, I never went to an academy or a club. Maybe it was because of that,” he thinks out loud.

Saurabh never went to an academy. Instead he went on fishing boats in Mumbai. His parents were never big fans of his love for the beautiful game and refused to finance his passion. So he bunked school and went on fishing boats for money to buy boots. “When they found out, they hit me. Now’s the time to study, they would tell me.”It was at that time when Adam saw him and decided he was worthy of making the pool. Unlike Aman, Saurabh was never a permanent fixture — he was initially dropped by Adam after the team’s tour to Brazil. But under Luis Norton de Matos, he was getting chances and he thought he was going to make it.

Of his post-World Cup life, Saurabh talks of keeping at it, focusing on training and support from friends and family. He makes it sound easy. One admission though reveals that it was anything but.
He could never bring himself to switch on the television when India were playing. He checked out Brazil and Spain, but not India. Not once.

On the few occasions he feels like discussing the World Cup, Saurabh does with his roommate at Chennaiyin’s team hotel Hendry Antonay. The latter tells him about the atmosphere inside the JN Stadium and how much faster their opponent’s game was. There is one thing Hendry can’t tell him about though — what it was like to play in the World Cup.Hendry was one of the four in India’s 21-member squad who did not play even a minute at the tournament — him and Mohammed Shahjahan were the only two outfielders. Imagine that! Making it through all odds into the country’s first ever World Cup team and never getting to run out!

The right-back was first spotted by Adam while playing for Pune FC in an U-15 I-League, but that wasn’t the first time he had worn India colours. “Even before that, I was selected for the national team,” Hendry says. “But I did not have a passport. No one in my family knew anything about a passport and everyone thought getting one was too expensive. So in the end, I could not travel with the team.”
Hendry was on the verge of being sent home when Adam was forced to resign. His replacement De Matos took a fancy to the lanky defender and drafted him back into the team. He was never the first name on the team sheet, yet even he believed he was going to get a chance at the World Cup.

His decision to keep out of the Indian Arrows team (Hendry is not coming back, AIFF officials were saying as early as the day after India’s final game) may hint otherwise, but Hendry still views the World Cup in an uplifting light. “Near my house (in Bengaluru’s Austin Town), there were all these footballers who had played in the Olympics a long time ago (Anthony, Kanniah, Raman and Shanmugham played in the 1948 and 1952 Games),” Hendry says. “They are long gone but people still speak of them. Maybe one day, after I’m gone, people will still point at my house and say, that’s Hendry’s house. He was at the World Cup.”

Now we are on Telegram too. Follow us for updates
TAGS
U-17 World Cup Aman Chetri Saurabh Meher Hendry Antonay