Gokulam Kerala FC were in deep crisis little over a month ago, but they have hit a purple patch at the moment.

KOZHIKODE: Gokulam Kerala FC were in deep crisis little over a month ago, but they have hit a purple patch at the moment. The latest casualty in their mini fairytale run are the mighty East Bengal. The visitors succumbed 2-1 to the hosts at the EMS Corporation Stadium in Kozhikode on Saturday as their I-League title chances took a massive blow.

Despite being the superior side in the early exchanges, Gokulam fell behind to a Katsumi Yusa penalty in first-half injury time. 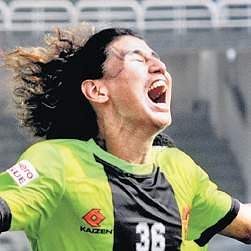 However, they came back to stun the visitors in an eventful second half. Kivi Zhimomi (in pic) struck in the 51st minute to level proceedings before substitute Salam Ranjan Singh turned an Arjun Jayaraj cross into his own net to send the Gokulam faithful crazy.

East Bengal are now five points behind leaders NEROCA FC, who have played one match more and three behind second-placed Minerva Punjab FC who have a game in hand. For Gokulam, the win takes them to eighth spot with 16 points.

“Gokulam played well and worked very hard. They played as a team. They deserved the victory. We lost vital points in the title race. Lack of concentration hurt us in the second half,” East Bengal coach Khalid Jamil said.

East Bengal’s only effort in the first-half was a Mahmoud Al Amna effort which needed a full-length dive from Bilal Khan to keep the score at 0-0. However, a penalty given for a foul on Cavin Lobo by Emmanuel Chigozie was converted by Katsumi to give the Red and Golds a 1-0 lead going into the break.

However, Kivi equalised for Gokulam within six minutes of the restart to launch Gokulam’s unanticipated comeback. As the visitors struggled under the sun, Kisekka hit the crossbar in the 76th minute before rattling the bar with a header again in the 82nd minute.

Their perseverance bore fruit in the 87th minute with Salam’s own goal. Both teams ended with 10 men each as tensions boiled over in injury time. With just three more games left in the campaign, it looks like the domestic title will elude the Red and Gold Brigade once again. Their next match is at home to Chennai City FC on January 24 before facing NEROCA in what could be a title-decider at Kolkata on January 27.
adwaidh@newindianexpress.com
CCFC post vital win
In a game with implications on the race to avoid relegation, Chennai City FC thrashed Churchill Brothers 3-1 to leapfrog the Red Machines and come out of the drop zone.