Being an Indian Super League team’s head coach comes with some unreasonable demands.

KOCHI:  Being an Indian Super League team’s head coach comes with some unreasonable demands. Win matches, play football with a high entertainment value, groom young Indian players and based on ISL’s history — do it all over eighteen matches. Coaches come in for a year or two and inherit a whole new team. Dutch tactician Eelco Schattorie finds himself in one such hot-seat at Kerala Blasters. The pre-season is coming to a close and the league starting in less than three weeks.

As a first step, Schattorie has elected former Paris Saint-Germain and Middlesbrough frontman Bartholomew Ogbeche as the new club captain. However, the Dutch mastermind, by his own admission, is yet to figure out his strongest playing eleven. 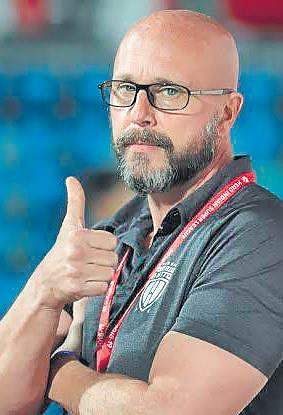 The team’s pre-season also didn’t go according to plan after their UAE tour was cancelled after just one game due to a breach of contract by the promoters and organisers. “Pre-season did not go the way I wanted it to. And after five weeks of working, I’ve not had the chance to see my strongest eleven. Hopefully, we can catch up in the upcoming weeks. For us, it is a huge challenge, but at the same time, we have to start somewhere. We have to try to make it work as soon as possible,” said Schattorie.

This will be the first season where the ISL will be the top league in the country, knocking I-League off its perch. Schattorie, who has been involved both in the ISL and the I-League, refuses to dwell too much on the significance of it but is no fence-sitter on the matter. “ISL has more media coverage and that’s a good thing. But the thing that has to be really emphasised is what is happening at the grassroots and what is being done for youth development.

That, in the end, makes everything sustainable. So whether they (AIFF) decide that the ISL is the only league or I-League is the only league, it doesn’t have any specific meaning,” said Schattorie. The former NorthEast United coach will be closely working with Sahal Abdul Samad, who has been touted as the next big star of Indian football. Schattorie though believes he has a long way to go.

“I’ve been working with him for a few weeks. He was with the national team and so I didn’t get a lot of time. He has tremendous talent but you can see he has never really been coached. I think he played in UAE where he was born. There he never played in a club-level competition. Every week, there is a news article about how good he is. It is not good and I have told him this and asked him to take his time and be humble,” said Schattorie.

Stay up to date on all the latest Football news with The New Indian Express App. Download now