New teams and dreams in bubble of football

It will be a significant occasion nonetheless. After the pandemic, ISL is the first major sporting event to be hosted in India.

BENGALURU: When ATK Mohun Bagan face Kerala Blasters in the Indian Super League (ISL) season-opener at Goa Medical College Athletic Stadium in Bambolim on Friday, the atmosphere will not be usual. The buzz associated with Goan crowds will be missing. The competition will be conducted in a bio-bubble without spectators.

It will be a significant occasion nonetheless. After the pandemic, ISL is the first major sporting event to be hosted in India. Tournaments in a few sports have been held, but not on this scale. Eleven teams featuring an army of foreigners as players and in the support staff, 115 matches in three venues — there is a lot to handle. Long duration (over four months) is another challenge. 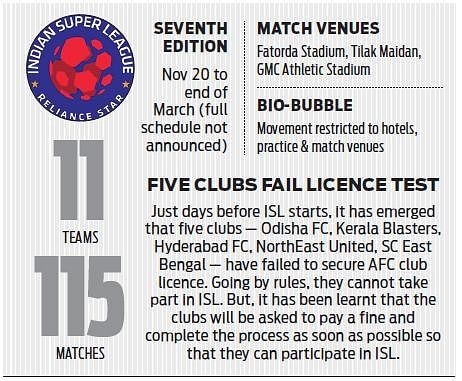 It will also be ISL debut for two giants of Indian football — Mohun Bagan (renamed ATK Mohun Bagan) and East Bengal (renamed SC East Bengal). Cabinets of these Kolkata clubs glitter with trophies that they started winning around 100 years ago. Amidst Indian football’s transformation into something different in the form of ISL and the birth of new teams, absence of these two clubs meant a big void, considering their legacy and legion of fans, which runs into millions. Their inclusion adds value to brand ISL, other than making the competition more diverse.

“It is good to see new teams coming in. It adds to the competition. Also, more players will be getting an opportunity to express themselves in the top tier of Indian football,” said Hyderabad FC defender Adil Khan, who is going to miss the noise at the stands. “Passionate fans who cheer and motivate give us extra energy. It will be missed. But keeping them away also means they are safe.”The number of games for the season has increased from 95 after the arrival of ATK Mohun Bagan and SC East Bengal.

The seventh edition of ISL is going to see another first — a bio-secure environment. Every move of the players and support staff will be monitored. Their mobility will be restricted to hotels, training grounds and match venues. Staying in this environment for more than four months and obeying rules will be a big task. “Speaking of the bio-bubble and the restrictions that come along, it’s not easy.

But it’s not impossible either. Keeping aside physical fitness, the biggest advantage this season will be for the team that adjusts the quickest and stays mentally fit. That’s going to be important,” said Mumbai City FC midfielder Rowllin Borges. However, it is not all doom. With the tournament to be played in just three venues in one state, teams will be spared the rigours of hectic travel.

Now we are on Telegram too. Follow us for updates
TAGS
ISL