With howlers becoming a common occurrence, experts believe it’s a result of lack of concentration and wanting to hurry through proceedings

CHENNAI: Nitin Menon and CK Nandan, the on-field umpires for the IPL match between Mumbai Indians and Sunrisers Hyderabad on Wednesday, accidentally combined to rewrite laws of the game.
David Warner had hit Jasprit Bumrah for a four off the last ball of the sixth over. By conventional laws, Shikhar Dhawan should have faced the first ball of the seventh over. 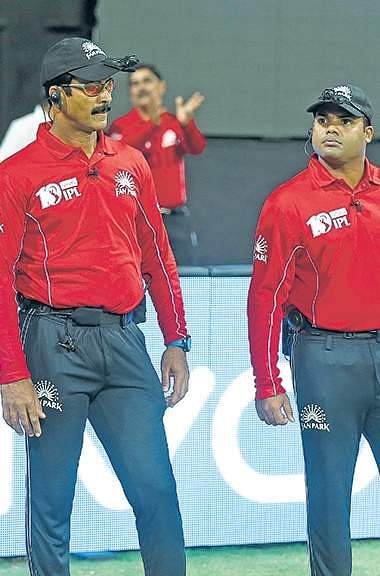 However, Warner was the one on strike, as the umpires and players collectively pressed the snooze button.

There has been a growing dossier of umpiring mistakes, nay, howlers, at this year’s edition, but nothing comes close to this. The change of strike (save a single or three) at the end of an over is one of the basic tenets of the game, but the enforcers, due to some reason, forgot to impose it.

Former Test umpire Vikram Raju says it’s due to lack of concentration. “Umpires lack concentration while on-field,” he told Express. “They weren’t following proceedings on the field. When there is a new over, how can the two umpires allow the same player to play the first ball?”
One of the major currencies towards becoming an umpire is concentration. Raju says that characteristic is amplified during something as fast as a T20 match. “Umpires have to be serious but most haven’t done justice to the chance they’re getting of officiating in IPL.”

While howlers — think Rohit Sharma against Kolkata Knight Riders on Sunday — are part and parcel of the game, they are quickly becoming the norm, rather than the exception. Raju, who officiated in the tied Test at Chennai in 1987, has a theory. “These days, most umpires are flown to and fro. So they’re 3-4 hours away from home. Hence, there’s an urgency on their part to finish off a few games so as to get home.”

Aakash Chopra, who has been commentating on IPL for a few years now, has also noticed that something’s not right in this edition. “It’s been quite ordinary in the first week,” he noted. “It has been a talking point for the wrong reasons, and it’s something that can and should improve as the competition progresses.”

But the 39-year-old doesn’t want to single out Indian umpires.

“There have been incidents during the India-Australia and India-England series as well, and that was the ICC’s Elite Panel. So it’ll be slightly unfair to start categorising Indian umpires but it’s there for everyone to see.”

BCCI had roped in Simon Taufel, one of the best international umpires, to educate domestic officials, before stopping the programme last year. It seems to have not had the desired effect.