Mumbai Indians are clearly a side who like to bat second. They have proven credentials for the same too.

HYDERABAD: Mumbai Indians are clearly a side who like to bat second. They have proven credentials for the same too. Out of the 7 times they batted second in this year’s Indian Premier League, they have won six of those encounters.

But Monday’s match against Sunrisers Hyderabad here at the Rajiv Gandhi International Stadium was a rare occasion when Mumbai skipper Rohit Sharma had no hesitation in batting first after winning the toss.
Rohit explained the rationale behind his decision after the toss. He wanted to give an opportunity to his batsmen to put a big total on the board and that they needed to spend some time in the middle.
Neither happened during the course of Mumbai’s innings as they managed just 138 runs in their allotted 20 overs. Right from the start, Hyderabad bowlers bowled tight lines which meant Mumbai could only score 36 runs for the loss of two wickets in the first Powerplay. 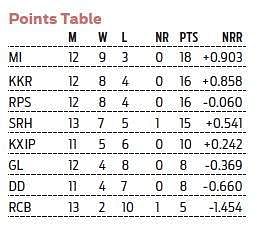 This was Mumbai’s second lowest total in the first six overs in this year’s IPL. Lendl Simmons, who was coming on the back of his innings of 66 against Delhi Daredevils, departed for just one run. Nitish Rana could add only nine runs to Mumbai’s score, before falling to Mohammad Nabi.
Their ship was steadied by Rohit Sharma who scored 67 off 45 balls. His innings included four boundaries and two sixes. In the seventeenth over, he was dismissed by Siddarth Kaul. The skipper was the only batsman who looked comfortable against the Hyderabad bowlers.
Nabi, playing just his second game of the season, bowled an impressive spell. In his four overs, he conceded only 13 runs at 3.25 runs in an over, the lowest economy rate by any player this year, overtaking Gujarat Lions’ Nathu Singh. Siddarth continued his sublime form with the ball and picked up three wickets giving away just 24 runs.
It was a combined bowling effort from Sunrisers that helped restrict the opposition. But once again, the problem of dropping catches came to the fore as Vijay Shankar spilled a simple catch of Parthiv Patel, early on in the innings.

Chasing a modest total, Hyderabad did not start off very well as they lost skipper David Warner in the second over, for only six. But after the initial hiccup, Shikhar Dhawan (61) and Moises Henriques (44) provided stability. The duo stitched together 91 runs, which more or less sealed the deal for hosts.
Despite two quick wickets of Henriques and Yuvraj Singh, the target was well within the reach as Dhawan and Vijay finished off the match with ease.
With the win, Sunrisers have 15 points from 13 games, with one match remaining against Gujarat Lions. They need to win their next encounter to seal their spot in the playoffs. Fellow contender for the fourth spot, Kings XI Punjab sit fifth with 10 points and have three matches to go.