Batting on his home ground, Hyderabad lad Ambati Rayudu played a memorable innings of 79 runs in just 37 balls to help his side Chennai Super Kings register a narrow four-run victory over SunRisers Hy

The win, their fourth in five matches, helped MS Dhoni's team reclaim the top spot on the league table.

The day had started perfectly for the home team. Electing to field, their opening bowlers led by Bhuvneshwar Kumar did not give CSK's attacking batsmen much room. Shane Watson (9) got liitle chance to free his arms. The burly Aussie hit his team’s first boundary shot ( a six) in the fourth over, and it proved to be his last as Bhuvneshwar forced his exit on the very next delivery. SRH’s top spinner, Rashid Khan then provided a breakthrough on his first ball. Faf Du Plessis (11) was the batsman dismissed. 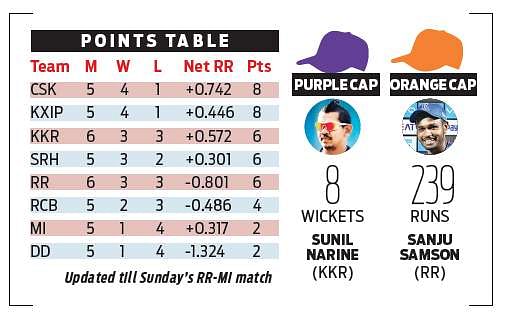 Then Rayudu walked in and from the onset, seemed to be batting on a different track. While Suresh Raina (54 n.o) struggled with the bounce initially, Rayudu took little time to switch gears and went after every bowler. Half-way into the innings, a total of around 150-160 had looked realistic, but the duo turned things around with their partnership of 100 in only 51 deliveries. Rayudu’s dominance could be gauged from the fact that he scored 72 of those runs.

The onslaught began in the 12th over, when Raina took on Rashid for consecutive sixes. In the 14th over bowled by Billy Stanlake, Rayudu hit three fours and a six to signal that a big total was coming. Rashid was targeted, as he went for 49 runs in four overs. Involved in a mix-up, Rayudu was run out. Dhoni, who walked in to a huge cheer from the crowd that had many passionate CSK supporters, hit a 12-ball 25 to help his team surmount the 180 mark.

The home team had a disastrous start. Young pacer Deepak Chahar bowled 17 dot balls and picked up three wickets — IPL debutant Ricky Bhui (who has been with the team since 2014), Manish Pandey and Deepak Hooda — inside the powerplay to dent the chase.

It looked like the match was over, but skipper Kane Williamson (84 off 51) and Yusuf Pathan (45 off 27) stitched a 79-run partnership to almost take the match away from the visitors. Two slower deliveries by Shardul Thakur and Dwayne Bravo removed the duo to give some breathing space to the thousands of CSK fans.

Rashid (17 off 4 balls), probably frustrated by his bowling disaster, tried to mitigate the damage by commencing his innings with consecutive boundary shots. With 19 required from the last over, SRH fell short by just four, and slumped to their second straight loss.

“The wicket had good bounce when we were batting. When we came on to bowl, there was a breeze too. It was the best condition for a pace bowler,” Chahar said after the match.