CHENNAI: The Indian women’s hockey team has been on an upward swing over the past few years. Fifth place at the 2014 Commonwealth Games was followed by bronze at the Asian Games. Then, under Germany’s Mathias Ahrens, they finished fifth at the Hockey World League semifinals in Antwerp in 2015. Qualification for the Olympics after 36 years showed there was improvement under the returning Neil Hawgood. Though they finished 12th in Rio, a gold at the 4th Asian Women’s Champions Trophy showed his methods were paying dividends. 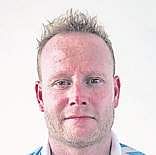 And now, the Netherlands’ Sjoerd Marijne has been handed the reins. Compatriot Eric Wonink will take charge as the analytical coach, with the duo having signed a four-year deal. Together, they will look to take the women forward in the current Olympic cycle. “We want to come closer to the best teams in the world. But to beat them, we’ve to work step by step, and the first goal is the Women’s Hockey World League Round 2 in Vancouver from April 1 to 9. We have a short period to get to know each other, and to bring over our ideas about how to play. The first week at the SAI Centre in Bhopal was exciting, and it gives me a good feeling,” Marijne told Express.

India has been one of the most-improved sides in women’s hockey. And the 42-year-old wants to work on the strengths of his team, while incorporating more control. “In India, there are skilful players, and we have to use that to achieve maximum results. International standards are passing and running at a high speed, which is very physical. I believe in playing dynamic hockey, and that suits the way Indians think about the sport. I like to attack, but we have to do it with more control. These things are possible with the women because their basics are developed. I believe you have to focus on the good things they have, and make them better there. That will let them grow in confidence as well.”

Marijne wants to incorporate the same fitness regimen that the men’s teams use. “Improvements the senior and junior men’s teams have made are because they did physical training and have started to play a passing game with less risk of turnovers. They’ve been able to control the game and that international standards will also be followed with the women.”
Wonink will also have a big role to play in this process. “Erik is responsible for analyses of our opponents and besides that, he’ll assist me in training. His speciality is defending organisation, and he’ll do this a lot with the girls. Besides that, he’ll support me with coaching the girls individually, with clips of training and matches,” he signed off.