Movie lover, vogue enthusiast, music ninja - the other side of Olympian Sindhu

“Sometimes I look at my matches and feel ‘Wow! I can jump so high. I do it so well,’ sIndhu spreads her infectious laugh.

Rahul: Do you know tennis?

Rahul (tired): Do you know Badminton?

Rahul (excited): Aaa Simranjeete hain apni zindagi..
They catch the train… an its happily ever after!

Why a filmy intro? Why not! After all, silver girl PV Sindhu’s other facet includes being an unswerving movie lover, a vogue enthusiast and of course a music ninja. Thanks to the evening of August 19, 2016, she made us glue to the idiot box and become a devotee of hers and most importantly, the game. Today, this unflinching girl stands tall (literally) as World No. 5 and we can’t be more proud about it. In a tete-e-tete, she opens up about how her guru Pullela Gopichand moulded her to become aggressive on the court, the way she enjoys the process of getting dolled up and how she relishes her sister’s payasam.

Life after Rio
Obviously, it has changed for the good. We saw her on cloud nine but how did it change her as a person? She says, “I am still childlike, friendly, down-to-earth girl, just like the way my dad always wanted me to be. The only change is, I can’t go out for shopping or food-hopping. So, I shop abroad now and it feels good though,” she laughs.

Super Series wins
She had Shanghai and Hong-Kong tournaments, where she successfully won her first
super series and was the runner-up in the Dubai Super Series. “People have a notion that athletes rest after Olympics, but it’s not like that for me. I won a super series,” an elated Sindhu says.

Badminton leagues, yay or nay?
“It helps junior players to learn from the stars. It is a different atmosphere. It ensures people get inspired from the foreign players as well. I feel there should be many more leagues like these,” she opines.

Double Dhamaka
Sindhu once said she wanted to play doubles too. Does she still have the urge? “I play doubles sometimes for fun and for change. My doubles partner is Ashwini Ponnappa. You have to get more defensive in doubles, but it has always been singles for me,” she smiles.

USP
Who can take away those smashes from Sindhu. Of course, her jump smashes are breathtaking. Sindhu, too, feels the same. “Sometimes I look at my matches and feel ‘Wow! I can jump so high. I do it so well,’ she spreads her infectious laugh.

Change in style?
Asked if there is any change in the style of coaching after she proves her mettle, she says that she has to change her coaching trends time to time, so that her competitors don’t get immune to it and take advantage.  “We need to be prepared for any playing style and have as many strokes as possible to counter opponents,” she elaborates.

Camaraderie continues
Sindhu played gracefully against Carolina at Rio. She lost the game, but won hearts not just for her performance but the way she celebrated her opponent’s win. “I won against Carolina in Dubai as well and not just at Premier Badminton League. It’s just a game and we both will fight for that title. Off-court, we exchange WhatsApp messages and calls. In fact after PBL, we had a party where she personally came to me and congratulated me,” she shares. 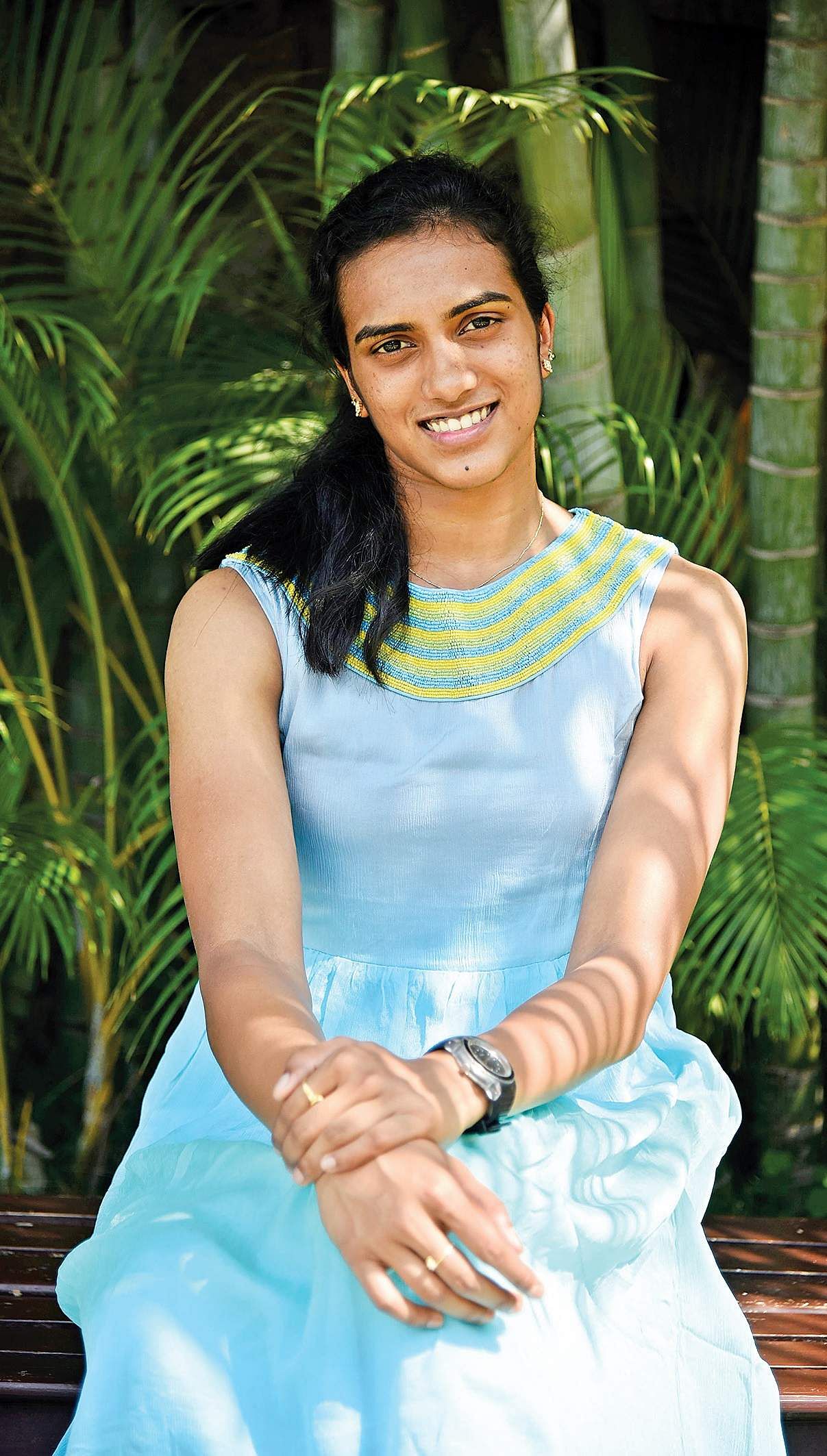 Style statement
Well, soon after her Rio dhamaka, Sindhu was seen in her stylish best and thanks to social media, we all know it was stylist Shravya Varma behind the scenes. “Shravya and I have common friends. She was keen on styling me and I thought that was the right time to get into the fashion arena, too. I am going to one stylist at a time. It’s not that I have any preferences.
Divya Reddy also styles me sometimes. I love getting dolled up. I thoroughly enjoy the process of make-up. People request me to drape sarees because of my height. I like to wear according to the occasion,” she grins ear-to-ear.

Filmy favourites?
Like any other girl, Sindhu’s favourite silver screen stars include Mahesh Babu, Prabhas from Tollywood. “They are very handsome,” she blushes and adds, “Anushka is really beautiful.” Well, when it comes to Bollywood, it is Ranbir Kapoor, Ranveer Singh, Hrithik Roshan and Deepika Padukone.
Sindhu’s dad PV Ramana says, “She loves watching films. Whenever she finds some free time, she jumps to watch a film,” he shares. “I watch Hindi and Telugu movies a lot. My recent movie was Shatamanam Bhavathi. It is a nice family movie,” she quips.

Biopic?
Biopics are in vogue. We saw Mary Kom, Milkha Singh, MS Dhoni and many more to come. Sindhu leaves the choice of actor to the director, but her personal choice remains Deepika Padukone. “She can do justice as she knows the sport. I haven’t thought of the biopic though,” she giggles.

Junkie!
Sindhu is a foodie. How can we forget that night, when her guru got her an ice cream after winning the silver. “I like every kind of junk food. I enjoy eating pani puri, ice creams, chocolates and biryani,” she shares. She also goes crazy over her mom’s kheema curry and fish curry.

Driving crazy
We all saw the red BMW car that she was gifted. It was equally viral on the internet. Sindhu says she learnt driving a couple of years ago and enjoys it thoroughly. “Sometimes I drive down for coaching and the other times, my dad drives me to the academy,” this gritty girl tells us.

Playlist
“Music is something I can’t do without. Although I listen to music according to my mood, I like listening to fast beat songs. Rise by Katy Perry is the song that makes me feel confident. I feel empowered and the lyrics are inspiring. Never give up is another song that I love to listen,” she reveals her secret to success. “You should also listen to these songs,” she advises.

To do list
To graduate from St Ann’s, Mehdipatnam, in MBA.
To achieve a lot more in Badminton.
“Otherwise, I have done pretty much everything,” she beams.

Diet before Rio
“Two months before the Olympics I was strict with my diet. At Rio, the cafeteria had everything that was tempting, but I resisted myself. I had a hectic schedule after Olympics with back-to-back tournaments. I lost 3-4 kgs in
travelling,” Sindhu reveals.

Social media smarty
Sindhu doesn’t don’t operate her Facebook account, but handles Twitter and Instagram by herself. “It is a nice feeling to receive encouraging messages from fans, which boosts my morale,” she quips. Sindhu says she follows people like Saina Nehwal, KTR, CBN and a few film personalities.

FOMO?
Not really. She is sorted and is focussing on All England Open Badminton Championships, which have already begun. “It’s a big tournament, but I am being calm and cool,” she says, who practises seven to eight hours everyday.

Raining endorsements
Sindhu is everywhere. “Himalaya Honey, GST, Bank of Baroda, Myntra, Moov. I enjoy doing ads. It is something different from my routine. I recently enjoyed acting for Moov ad,” she laughs. On being called to inaugurate events, she says that her managers co-ordinate with the organisers and let her know accordingly.

Me time?
This Pusarla girl relaxes with her parents and sometimes goes to her cousin’s place for dinner.  Do you miss them? “Sometimes I do miss them but the academy is too good. We play bet matches here to break the fatigue,” she chuckles.

Fitness regime?
“In a week, I have both on-court and off-court training sessions. If one day is on-court, the other day, I do weights training or endurance training,” she says.

Salon visit?
Sindhu often goes for pedicure as her feet get rough. She also admits that she is fond of nail art, especially the new, fancy gel nail art.

Lively moments with Guru
Just like any other dedicated coach, Gopichand is also liberal off-court and strict on-court. “Since I am calm and not aggressive, he asks me to shout, but I didn’t even after him telling me five to six times. Then he asked me to stand and shout in the middle of the stadium (Middle of eight courts here). I was just standing there and he told me, ‘Until and unless you shout, I am not going to let you play,’ and everyone was looking at me. I felt embarrassed. He started shouting at me and I began to cry but didn’t shout. That was the turning point. From then on, I learnt to be aggressive,” she narrates. “I am aggressive only on the court (laughs). Otherwise, I am a cool and jovial person,” she assures.

Closest friend in Badminton?
“Not really in Badminton, but I share everything with my sister Divya, who is a medical doctor. We enjoy spending time together and have our own gossip session,” she chuckles.

Blast from the past
Sindhu is six and a half years younger to her sister, who helped her do her homework as a kid. “Unlike other sister duos, we never fought. Whenever I didn’t perform well at school, she cried for me. She boosts my morale when I play.  Whenever we get time, we go for lunch. I  share all my secrets with her. She once served me payasam and it was delicious. With a serious expression, she said ‘Yes, I did!’ and I just hugged her. She is a great cook,” shares Sindhu.

Dad’s darling
Sindhu is mostly accompanied by her dad. He takes off from work just to be with her and support her. “He sometimes gives me suggestions, but I pull his leg by saying, ‘You are a volleyball player, and not Badminton,” she signs off.

Stay up to date on all the latest Sport news with The New Indian Express App. Download now
(Get the news that matters from New Indian Express on WhatsApp. Click this link and hit 'Click to Subscribe'. Follow the instructions after that.)
TAGS
Rio Olympics PV Sindhu silver medal