GOLD COAST : Projection of life reflected on sands of time. History was sewed seamlessly into the opening ceremony of the 21st Commonwealth Games on Wednesday. The landscape, element and iconography of the region were the main inspirations. The circular stage right at the centre of the Carrara Stadium was made of local sand. Gold Coast is all about sunshine, sand and surfing. It was all there. Local nippers carried a paddle board with names of all participating nations etched on them. The music was played by an orchestra and musicians were in beach attire.Giant projectors from floodlight towers weaved together old world — the Dreamtime (as the Aborigines would like to believe) — with the new. It was beautiful and crisp.

The stadium was a riot of laser beams, lights of different shades, and of course, loads of loud cheers. A sharp shower in the evening did not dampen the spirit. If the city needed something to wake its citizens up and persuade them to watch the Games, the ceremony set the tone. The stadium was filled to its capacity of 25,000. 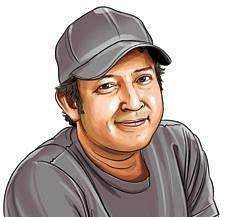 Aboriginal culture was the dominant theme. The countdown also began at 65,000 years before colonisation when indigenous people thrived. The ceremony too was peppered with Aboriginal motifs and symbols. The ‘Dreamtime’ — the Aboriginal understanding of beginning of the universe and its creation — echoed in the opening scenes.

Dreamtime is an integral part of their belief. It’s the beginning of knowledge and through this came the laws of existence. Perhaps, the catch-line of the Games — Share the Dream — too has this Aboriginal overtone. The didgeridoo turned into a symbol of freedom and empowerment as the baritone sound of the wind instrument pierced the air. Yugambeh elders (Aborigines of South-east Queensland) delivered the welcome address and called for unity as the Aboriginal flag was unfurled after the national anthem.

In a grand paradox, just hours before the countdown to the Commonwealth Games, hundreds of Aboriginal people gathered outside the Carrara Stadium. Holding placards and chanting: “no justice, no Games.” The organisers were forced to reroute the relay as thousands protested. Their belief: Australia is their land and British Empire colonised them. ‘Colonisation is not Games’, read one banner. They are calling this Games, the ‘Stolen-wealth Games’. One of the younger protesters felt: “This protest is about colonisation. We want to highlight how the white man came to our country and took our land.” They wanted Prince Charles to take permission from them before entering Australia.

“You had Gandhi. He freed you from colonisation,” said Denise, a 64-year-old indigenous lady. “Don’t forget the story.” She lamented there was no one to do that here. “You guys are not better off either. There is hunger and poverty,” she said. They have been protesting for a while.

Indian march
A day after needless controversies, Indians got into the groove on Wednesday. Rio Olympic Games silver medallist PV Sindhu’s brisk pace left a big gap between the flag bearer and the rest. They marched in trousers and blazers. Most of the hockey stars and ace shooters whose event doesn’t begin on Thursday were present. Some of the boxing stars were missing. Vikas Krishan is down with fever, others chose to be at Games Village as they got ready for the bout. The numbers were made up by officials.

Moment of the evening
The loudest cheer was reserved for hosts Australia. Local girl and the biggest star at the Games Sally Pearson took the baton in its last leg. Mark Knowles, another local hero, was the flag bearer. A giant inflatable Migaloo (the world’s first all recorded white humpback whale that appears in the east coast of Australia as it migrates from the cold waters of Antarctica to warmer tropical waters of North Queensland) entered the stadium to bring down the curtains on the colourful ceremony. As the sun rises on Thursday, all eyes will be on real sport.
indraneel.das@newindianexpress.com

England, an African nation!
England was listed as an African country with a population of two million in the official CWG programme. Organisers sought to make light of the embarrassing gaffe after England were somehow confused with Gambia, a tiny West African nation.

Medal even before the fight!
The CWG may not have begun till Wednesday but Australian boxer Taylah Robertson has already been guaranteed a medal. Taylah, competing in the women’s 51kg category, received a bye into the semis (boxers do not have playoffs for bronze medal placing). Only seven boxers have registered for this particular event.