Change of Roel but Oltmans still in touch with Indian wards

Coaching the Pakistan hockey side, like the Indian one, is fraught with danger. Roelant Oltmans knows this better than most. For a man who built the India team over the last five years, he will now be strategising against them. “(I will be) absolutely professional,” he said.

GOLD COAST : Coaching the Pakistan hockey side, like the Indian one, is fraught with danger. Roelant Oltmans knows this better than most. For a man who built the India team over the last five years, he will now be strategising against them. “(I will be) absolutely professional,” he said.In a green Pakistani blazer, Oltmans could not be missed. When it comes to hockey, Pakistan, like India, is a very demanding nation. Since the Asian Games final in 2014 against India, Pakistan have hit the nadir. To arrest the issue, the Pakistan Hockey Federation (PHF) turned towards the former India high performance director and coach to resuscitate its flagging fortunes. Perhaps Oltmans would have loved to begin his second innings as Pakistan coach against any other team but their bitter rivals. Though some tickets are still unsold in a few competitions, the India-Pakistan match on Saturday is sold out.

The Dutchman is aware of the enormity of expectations. Though he took over less than a month ago, he is hopeful Pakistan’s destiny will find direction from Saturday. “I know the India players well. Earlier we used to discuss about Pakistan in the dressing room and how to overcome their challenge,” he said. But now he will be discussing about Indian and how to stop them.It will be cruel to expect him to change Pakistan in this one month, but he is hopeful that he will be able to improve things. He feels Pakistan’s starting point (World No 13) is very low.

“The biggest challenge is the starting point. India were somewhere around (World No) 12-13 when I took over and now Pakistan are 13th. Progress will not be seen overnight. We can progress from 13 to 12 to 11 to 9 to 6 and then to the top. Immediately, we go into a number of big tournaments. This is a big one. Then comes Champions Trophy, Asian Games and then the World Cup. So it will not be too easy to introduce drastic changes in the team.“I know most of the players in the Pakistan team. We have played against each other before. We used to discuss technique and their style of play. So yes... I know them. But there are youngsters as well who I’m getting to know.” 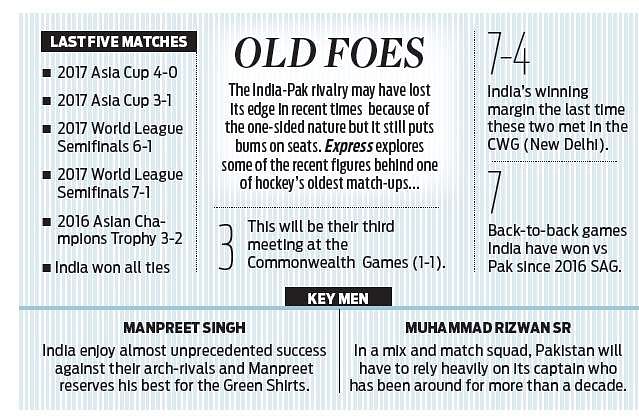 Oltmans said a team should be comprised of both senior and junior players. “Not only youngsters (but) you need some kind of a core. Build from there. At the same time you need older players who will give cohesion to the team. The Pakistan team right now is a mix.”The 63-year-old may have left India in slightly acrimonious circumstances but he is still in touch with his former wards. “Of course they are still in touch with me. We worked for five years together and we can’t be not talking. Even at the Games Village, we talk. It would not be normal if we don’t talk. I always tell them to go out there and win, except one match,” he laughs. “I was with them for five years and even here, I would be proud to see them do well,” he said.It remains to be seen how far India and Pakistan go in this crucial tournament that will kick-start a very busy 2018.