Adarsh shot 584 to top both qualification rounds. The Haryana lad then won the men’s final 27-26, overcoming a poor start. In the junior event, Adarsh had it comparatively better, overcoming Vijayveer Sidhu of Chandigarh 30-27 to claim a double. 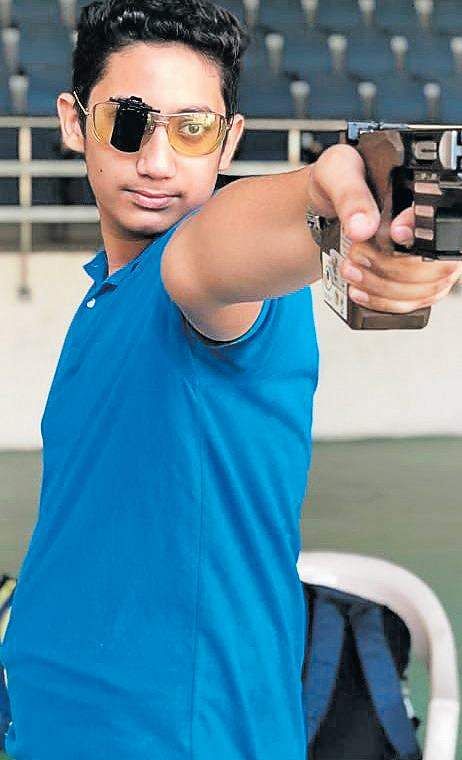 His story is as interesting as his meteoric rise. Born with a spinal condition, doctors were forced to operate on it when he was just six days old. Shooting was never his first love. The Faridabad boy wanted to pursue either badminton or cricket, where he used to be a wicket-keeper. But because of a back injury, he had to give up his dream.

Senior Nationals gold and a place in multiple World Cup teams have finally changed his mind. “I enjoy shooting. Victory at the senior nationals really infused me with confidence and I have not looked back since. I still play badminton sometimes. It hurts if I exert myself too much. Now that this competition is over, I will take a small break and I will be back to normal,” he told this daily.

Another unique thing about Adarsh is the fact that he is left-handed. Because of that, procuring equipment was a major obstacle when starting out. In fact, he used to borrow the grip and gun from his elder sister. “Now I have my own stuff. My shooting style is unique so it was difficult in the beginning.”

Adarsh had missed the Beijing World Cup final by two points and the Delhi final by five points. He wants to make sure no such thing is repeated at the upcoming World Cup in Rio de Janeiro. “I’m second in ranking in the team. I hope to do my best and make the finals this time.” The team is set to depart on August 9.

The southpaw does not have a personal coach yet. He trains under national coach Jaspal Rana and Pavel Smirnov. But he says it has not proved to be an issue as of now. Post the Delhi World Cup, he was worried about his board exams and subsequent college admission. “Thankfully, things have gone smoothly. I have been admitted to the DAV College in Chandigarh,” he signed off.

Now we are on Telegram too. Follow us for updates
TAGS
Shooting Adarsh Singh