The Indian team for the Rowing Worlds — that will begin on Sunday in Austria — has departed, according to Rowing Federation of India.

CHENNAI: With five World Championships (rowing, boxing, weightlifting, wrestling and gymnastics) happening in the next three months, it remains to be seen how National Anti-doping Agency (NADA) is planning to conduct out-of-competition dope tests on athletes before the start of the respective tournaments.

According to a Wrestling Federation of India (WFI) official, there were no dope tests during the selection trials for the Worlds that happened recently. However, the WFI official said that it might happen anytime before the tournament.

The Indian team for the Rowing Worlds — that will begin on Sunday in Austria — has departed, according to Rowing Federation of India. NADA’s biggest challenge will be the inter-state athletics meet in Lucknow (begins coming Monday) and the Indian Grand Prix VI (on September 5 in New Delhi).

Many athletes will try and seal a Worlds berth in these two meets. It will be interesting to see how NADA goes about the process.  Athletics Federation of India officials are sure that those aiming to qualify for Worlds will be tested in both competitions. 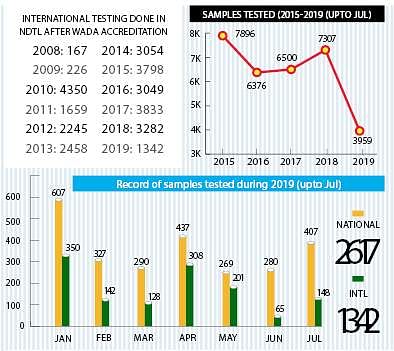