In the same list for 2016, released last year, India had occupied the same spot with 73 positive tests from 2831 samples collected.

CHENNAI: In a worrying sign for Indian sport, a report released by the World Anti-Doping Agency consisting of dope infractions recorded in 2017 across the world has revealed that the country was fifth-highest when it came to total number of positive dope tests in Adverse Analytical Findings (AAF), while it was seventh-highest in the list of Anti-Doping Rule Violations (ADRV) .

The report stated that the French Anti-Doping Agency had the highest number with 164 AAF followed by USA with 136. Only China (84) and Italy (75) had more cases of doping in 2017 than India with 71. Out of this, 57 were registered as ADRVs. This number might rise as it is understood that there are still pending cases. But an even more worrying statistic is that India’s 71 dope cases came from a much lesser number of samples collected.

While the French anti-doping agency collected 7276 samples, USA collected 9820 and China 11049. The National Anti-Doping Agency’s 3174 samples collected pales in comparison to these numbers. Indeed, when it comes to the dope cases per samples collected ratio, only Iran does worse than India in the top ten.

In the same list for 2016, released last year, India had occupied the same spot with 73 positive tests from 2831 samples collected.  As revealed by this newspaper, the number of dope cases registered by NADA has risen sharply since. The first eleven months of 2019 alone saw Indian athletes fail 156 dope tests, a cause for concern ahead of an Olympic year.

The WADA report also revealed that athletics had registered the most number of failed dope tests in the year with 295 cases while bodybuilding was a close second with 292. Cycling was a close second with 280. Even more intriguing is that football, with 167, is ranked ahead of one of the usual suspects — weightlifting (155).  Cricket had six cases. 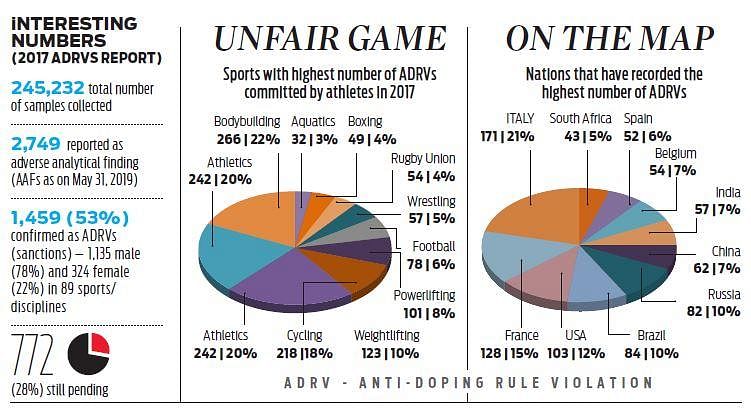 Now we are on Telegram too. Follow us for updates
TAGS
Adverse Analytical Findings Doping WADA Indian sposts India doping