Mary Kom won the bronze medal in the flyweight category at the 2012 London Olympics.

NEW DELHI: In a career spanning 18 years, there is only one achievement that has eluded MC Mary Kom: an Olympic gold. And that hunger is what is keeping her going even at the age of 36. With people constantly asking her when she plans to hang up her gloves, she finally revealed that after claiming gold in Tokyo, she plans to bid farewell to boxing.

“After 2020 I want to retire. My main mission now is to win a gold. I really wa­nt to win it this time. I have always tried to give my best and to sign off with a medal will be the best way,” Mary Kom said on the sidelines of an event organised by Colgate.She has been the torchbearer for the sport in India and six World Championship gold medals, an Olympic bronze, and five Asian Championship wins are testament to that. She hopes someone can take up her mantle soon. “I have fought hardships outside and inside the ring for so long. Nobody can keep doing it forever. There are so many bright and upcoming youngsters and I hope and pray that we find a new Mary Kom soon.” 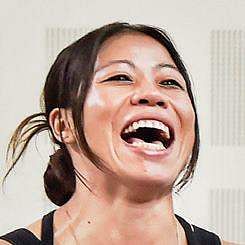 With uncertainty surrounding timings of the Olympic qualifiers, Mary is not sure whether it will be held this year or the next. With regards to her preparations for the upcoming World Championships, she says the event will give her a fair idea on what to expect in Tokyo.

“We are training regularly for all competitions not just the Olympics. In the World Championships, I will get to know the opponents, what their strengths and weaknesses are. Accordingly I can prepare. I will also get extra time for preparing if the qualifiers are held later. I will try my best to qualify at the first attempt but there will be another chance.”

With her weight category (48kg) not being part of the Olympics, she shifted to the nearest weight category (51kg). Something she has done on and off in her career — 2012 Olympic bronze being a case in point.
“I’m more comfortable in 48kg. But I have fought in 51kg before. It is not new for me. I have experience on my side and I will take it as a challenge and will try to prove myself.”