Archery Association of India elections done, now over to court

According to Rao, they had the 33 per cent quota required to form the body.

While union minister Arjun Munda was elected president in the capital, BVP Rao won from Chandigarh. Both factions claim to have followed the constitution and abided by the National Sports Code. They will now have to submit their respective compliance reports within the next two weeks to the Delhi High Court after which the Supreme Court will take a call in July. 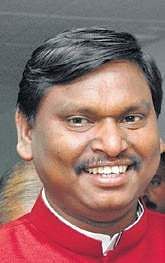 While an IOA observer — Onkar Singh, Cycling Federation of India secretary — was present in Delhi, nobody was sent for the Chandigarh polls. Interestingly, a WA representative was there to record the process in Delhi. A report from the world body is expected a week later. No observer from the government was present in either.

While WA had issued a suspension threat to AAI for the World Championships, it has been reliably learnt that no such sanction will be imposed as team meetings are already over in ‘s-Hertogenbosch, where it will be held.

“Archery is quite popular in the tribal belt and I have always tried to help my state. Now that I’m at the helm of the national body, I hope to take the sport to greater heights. I also urge the other faction to keep politics aside and let us work for the betterment of the sport together,” Munda said.
According to the Delhi camp, they had representation from 23 states and only eight turned up for the elections in Chandigarh. “We have a majority and have followed all the rules. They did not have any observer. Quite a few of their decisions are unconstitutional. Now, we will be handing over all the necessary documents and let the court decide,” a member of the Delhi camp said.
In Chandigarh, additional district judge (retired) Tejinder Bir Singh, who was the returning officer, declared Rao and his executive committee elected unanimously.

According to Rao, they had the 33 per cent quota required to form the body. “They (rival group) tried their best and tried to coerce so many of our people to vote for them or not to turn up here. In spite of all that, we conducted the elections in a fair manner,” Rao added.
On the absence of an observer, he said, “The government did not send an observer for either for which I’m thankful. They understood there is something wrong with the entire process. Even in the last elections, IOA did not send an observer so I do not think that is an issue,” he revealed.

They also appointed three ex-archers as members of the General Council while four were included in the Executive Committee. Interestingly, DK Vidyarthi was included in both bodies as one of the vice-presidents!

Stay up to date on all the latest Sport news with The New Indian Express App. Download now
TAGS
Archery Association of India