CHENNAI: Before leaving for Sonepat, Vishwa Deenadayalan had only one thing on his mind. “I want to win this.” The ‘this’ he was referring to was the juniors event at the national-ranking table tennis championships (North Zone). That’s how confident he was.It’s fair to say that the 15-year-old’s confidence wasn’t misplaced. On Saturday, he edged out Mizoram’s Jeho Himnakulpuingheta in a thrilling final. 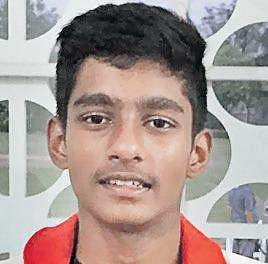 The fifth seed, who has been playing the sport at some level for the last eight-and-a-half years, has already represented India in age-group events. Even though the 11th standard boy from Jaigopal Garodia Vivekananda Vidyalaya HSS is taking his studies very seriously, he wants to ultimately continue his success on the table. How did he take to the table in the first place? Like most siblings, he watched his sister play the sport and it was love at first sight. “My sister (Raveenaa) used to play the sport and I just like it straight away,” he said.

All it took was a few years of training for his coaches (Ramnath Prasad and Jai Prabhu Ram) to realise that he was cut from a different cloth. Even India player A Sharath Kamal concurs with that sentiment. “He’s an extremely talented player,” the 37-year-old multiple Commonwealth Games and Asian Games medallist said. That will be music to Deenadayalan’s ears as he considers Sharath as his role model.

What will also please the youngster is that his transition to the junior circuit seems to be progressing without a hitch. The product of the Krishnaswamy Table Tennis club in Anna Nagar has been a well-known cadet name because of his excellence at that level. In fact, he was ranked as the country’s best under-15 player last year.

“I was the national under-15 champion last year,” he said. Not just that, the teen has already occupied the top step of the podium in several international meets — gold at the cadet boys’ team event at the Serbia Open in 2018 among them. He has already been to several countries in the hunt for trophies, a calling, he hopes, will continue for years to come.

Stay up to date on all the latest Sport news with The New Indian Express App. Download now
TAGS
Vishwa Deenadayalan paddler