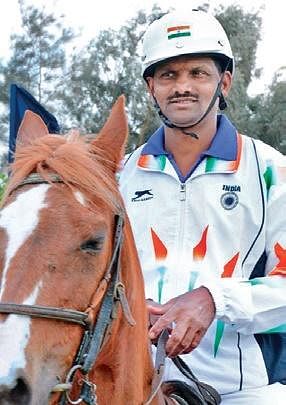 With this sport related to equestrianism not being an Olympic sport and not being part of the Asian Games after a solitary appearance in 1982, Sawant’s inclusion came as a surprise. The Risaldar from B Squadron 61 Cavalry, New Delhi, however, feels the recognition was long due given his achievements. “My name was sent for the award every year since 2016.

The recommendation will help the sport grow in the country,” Sawant told this daily. Hailing from Dodamarg of Sindhudurg district in Maharashtra, the 45-year-old won multiple medals for the country including gold in the 2016 World Cup in Egypt. “I won three gold, including a top-finish in an individual event during the 2016 World Cup.

We also won team silver in the 2018 World Cup in Abu Dhabi. Besides, I won individual gold, silver and bronze in the World Cup Qualifiers in Abu Dhabi and Australia in 2015 and 2018,” he added. Sawant joined Indian Army as an 18-year-old in 1993 and got inclined to horse riding after shifting to the 61st Cavalry Regiment in Jaipur next year. “Col Rupinder Singh Brar had won gold in individual tent pegging in the 1982 Asian Games. That was the reason I started riding horses and I want to replicate the feat.” Equestrian Federation of India secretary-general Col Jaiveer Singh welcomed the decision.

Now we are on Telegram too. Follow us for updates
TAGS
Ajay Sawant Arjuna award