Dahiya, among four Indian wrestlers to qualify for the Tokyo Games so far, lost to Gamzatgadzsi Halidov of Hungary.

CHENNAI: After India’s Greco-Roman wrestlers drew blanks at the Individual World Cup in Belgrade, freestyle grapplers including World Championship bronze medallist Ravi Dahiya too failed to impress and made an early exit. Rustiness due to a lack of practice was evident as three out of four Indian grapplers in action at the event on Wednesday bowed out losing their first bout. 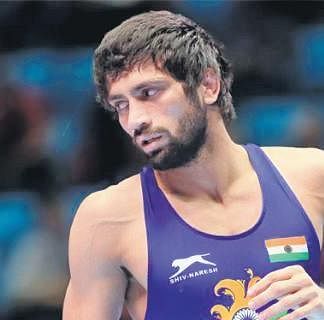 Dahiya, among four Indian wrestlers to qualify for the Tokyo Games so far, lost to Gamzatgadzsi Halidov of Hungary. The 23-year-old Haryana wrestler was leading 6-4 when his opponent pinned him to win the bout by a fall in the last minute of the contest. The Hungarian lost his next bout in the last-eight round thus drawing curtains on Ravi’s campaign.

Making his international comeback after serving a four-year doping ban, Narsingh Yadav lost by a narrow margin of 10-9 to Osman Kubilay Cakici of Germany in the qualification round. Osman lost in the pre-quarterfinal which ended the Maharashtra wrestler’s hopes of making it to the repechage round.

Sumit Malik (125kg) was also beaten 4-2 by Egor Olar of Moldova in the qualification round. With Olar’s defeat in the quarterfinal, Malik’s run also came to an end in the meet.  Naveen kept India’s hopes alive in the 70kg weight category. He won his opening bout against German Shamil Ustaev 8-4 but lost to Islambek Orozbekov of Kyrgyztan 12-2 in the quarterfinal. Despite losing, he can have a shot at a bronze medal if Orozbekov wins his semifinal bout.

Improved show by women
Even as Rio Olympic bronze medallist Sakshi Malik (65kg) was blanked by Mimi Nikolova Hristova of Bulgaria 11-0 in her first bout, Anshu Malik (57kg) won silver. She lost to Anastasia Nichita 5-1 in the final. Pinki also made it to bronze medal bout but lost to Olga Khoroshavtseva 10-0. Earlier, she won the qu­­arterfinal against Tetyana Kit but lost to Iryna Kurachkina in semifinal.

Now we are on Telegram too. Follow us for updates
TAGS
Ravi Dahiya Indian wrestlers wrestling Narsingh Yadav