CHENNAI: Thirteen Indian singles players entered the main draw of the Chennai Open Challenger. At the end of the second round, only one — second seed Yuki Bhambri — remains. In terms of that metric, this is the worst Indian performance at a home Challenger in the last three years (Ramkumar Ramanathan was the only Indian to play in the quarters of the Kolkata Challenger in February 2015).

In the six completed Challengers in India since then, they have at least had two players in the last eight. While it’s true that Ramkumar, the country’s No 2, skipped the event, India’s other leading exponents did feature. Out of the top-15 ranked Indians, 13 either played in the main draw and/or the qualifiers. So one cannot even make that argument of the best Indian players giving this a miss.

What went wrong? For starters, Bhambri is the only Indian to have beaten a foreigner (Abhinav Shanmugham’s win in the first round came via a retirement after his opponent, Ivan Nedelko, had won the opening set).

Two seeded athletes (Sumit Nagal and Prajnesh Gunneswaran) losing in the first round also did not help matters. Saketh Myneni and Sriram Balaji’s first-round exits compounded the issue. While a few of the younger players were always bound to lose against experienced campaigners from abroad, lessons can be learned.

Take for instance the approach shown by Jordan Thompson, the top seed, and Bhambri himself. Even after their wins, they hit the court to practice. A few Indians had already exchanged their racquets for headphones. A prominent Indian doubles team went one step further. They indulged in a few fried items just before their encounter. They were served more bakery items during it. 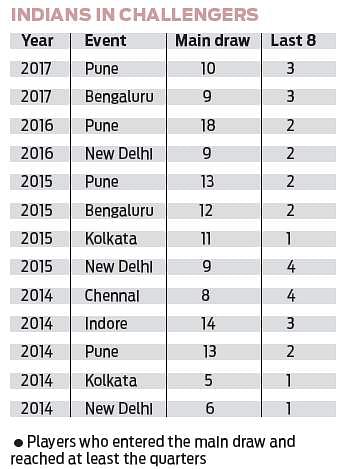 Bhambri, the torch-bearer of the sport in the country since Somdev Devvarman’s retirement, has a different take on the matter. “I have always said that we need to host more and more ATP Challengers in India,” he said. “Some of the players are very young in their careers, 18-20 years of age. If I had played Challengers at 18 or 19, even I would have lost. But only after playing tournaments like these, will players get the necessary exposure at this level.”

The lack of Challengers — ATP’s second-tier competition — in India has often been cited as a reason behind most of the singles players not developing beyond a certain level. One can see why. India has played host to 13 Challengers (excluding the ongoing one) since January 2014. Before that, they did not have a single Challenger from 2009 (for perspective, USA had 21 Challengers in 2017 alone). The flipside of the argument is how players are not making most of the chances they are getting. Which is how Karti Chidambaram, a vice president of the Tamil Nadu Tennis Association (TNTA), prefers to look at it. “You want to host a Challenger to give your boys a platform to get some ranking points under their belt... this has been disappointing.”

Interestingly enough, the coaches of Sumit Nagal (Javier Ferrer) and Sasi Kumar Mukund (Gilbert Schaller) refuse to use that word. They say that most of the Indian boys have the tools needed to carve out a career. However, tellingly, they suggested that the Indians need a stronger work ethic. “Sumit is a talented player,” Javier said.

“But to make it at the top level, he has to do what my brother (David) did. He has to start eating and dreaming tennis. If he can do that, he will be a successful player.”

Another Indian player — Sidharth Rawat who lost to Bhambri on Wednesday — is doing exactly that but he is aware of the limitations. “I need to develop weapons like a bigger serve, return better... it is vital to get those free points when you are playing somebody like a Yuki,” he said. “We need to keep playing matches like these against them for us to get that level of exposure.”

Rawat, World No 531, is under no illusions. He might seek a job outside tennis (he has a degree from Hansraj College in New Delhi) if he is not able to break even in a few years. There have been scores before Rawat who have taken that decision. There will be many after Rawat who will opt for that route if the current trend doesn’t change.

Now we are on Telegram too. Follow us for updates
TAGS
Chennai Open Challengers Yuki Bhambri Sumit Nagal