Built in 1904, the heritage monument in One Town is now covered by dust and soot

VISAKHAPATNAM: With garbage strewn all around and the dogs rummaging the leftover food, the statue of Queen Victoria seems to be a witness to the neglected situation even as it is surrounded by parked vehicles. Unfortunately, the statue adorning a royal regalia and a crown with an orb in hand, was once considered a major attraction and now lies enveloped in coal dust and soot.

Located in the One Town area - one of the oldest areas of the city, the bronze statue is fenced by grills which are rusted and dirty on a circular base seen in the centre of the road facing the one town area. But no one pays attention to it. 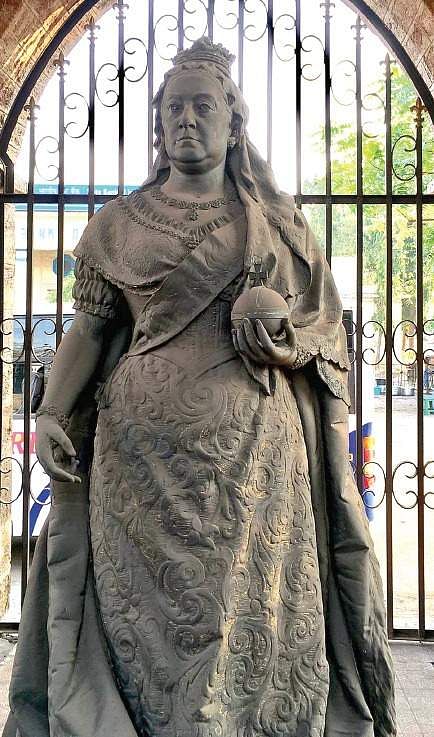 While heritage lovers express concern over the need to conserve the heritage structure and maintain cleanliness, others opine that the statue is an epitome of history and the need of the hour is to preserve it.

A resident of the One Town, Ramani, said, “I have been living here for more than a year, however I had no idea about the statue being made of bronze as I have always seen it in black, layered with dust. The statue which is centrally located can be a tourist getaway, provided it is well maintained and monitored frequently.”

Jayashree Hatangadi, heritage activist and a member of INTACH, expressed, “The facelift of the pavilion including the sand blasting of the statue was done in April 2016.

The weeds growing from the spaces between the structure were also pulled out as it looked untidy and the statue was not visible. Within a year the situation is back to square one.”

“It is an iconic structure and losing such heritage structures will lead to loss of history and story of the city. The original statue had a sceptre in hand which is missing now,” she quipped.

People frequently cough and sneeze in the area which show high levels of pollution due to the coal dust from the cargo handling by the Visakhapatnam port.

Following the judgment by the National Green Tribunal (NGT) which asked VPT to submit quarterly reports so that they can check if pollution levels are under the permissible limits or not, Shirin Rehman, a social activist, stated that once the pollution is controlled, neither the people nor the heritage structures will suffer. She said, “The Queen Victoria pavilion is a heritage monument and is supposed to be kept neat and clean, unfortunately it is a sad spectacle to look at.