Angara’s  love for Visakhapatnam made him write several books on the history of the City of Destiny.

VISAKHAPATNAM: Noted writer and historian Angara Surya Rao, who chronicled the history of Visakhapatnam, passed away at his house in the One Town area on Friday evening. He was 94. His wife had died a year ago. 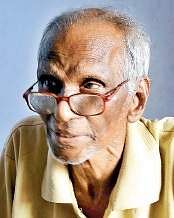 The writer was born in July 4, 1927 in Mandapeta of East Godavari district, but had always called Visakhapatnam his native place because of the love and respect he had earned in the city. The writer Started his journey in Visakhapatnam, on March 16, 1949, after he got his first job as a clerk in the then women education department. Later in 1953, he started working at District Educational Office in men department and retired in 1983.