GUNTUR: The Women Development and Child Welfare Department has come up with a 5-point awareness programme to curb child marriages in the district.

The awareness campaign aimed at eradicating the social evil, has already been conducted in Guntur, Gurazala and Narasaraopet divisions.

Tenali division will be covered in the next phase of the awareness campaign, where the prevalence of child marriages is high.

The awareness campaign against the social evil is being organised in a big way in different parts of the district by involving staff of the Integrated Child Development Services (ICDS), Anganwadi workers and helpers, women’s rights activists and Non-Governmental Organisations. 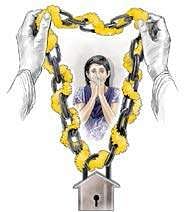 A child marriage was averted at Uyyandana village in Krosuru mandal of Palnadu region recently with the timely intervention of the Project Director of the Women Development and Child Welfare Department.  According to official figures, 69 child marriages were foiled in the district between March 2016 and March 2017.

There are 4,405 Anganwadi centres in the district with 4,281 workers and 3,855 helpers. The services of Anganwadi staff are being utilised in a big way to eradicate the social evil by promoting awareness among rural people about the harmful effects of child marriages.

Expressing concern over widespread prevalence of child marriages in the State, K Suseela, a women’s rights activist of Karankivaripalem in Nagaram mandal, said: “Gender discrimination is the root cause of the social evil. Girl child education should be promoted in a big way to eradicate child marriages.”

D Sukh Jeevan Babu, Project Director, Women Development and Child Welfare Department, is hopeful that the conduct of the 5-point awareness campaign will help bring an attitudinal change among people, which is vital to eradicate child marriages.