Vizag recorded more than 40 degrees Celsius for the second time in less than two weeks on Monday, as many areas on the city outskirts recorded temperatures hovering around 42 to 44 degrees Celsius.

VISAKHAPATNAM:Vizag recorded more than 40 degrees Celsius for the second time in less than two weeks on Monday, as many areas on the city outskirts recorded temperatures hovering around 42 to 44 degrees Celsius. 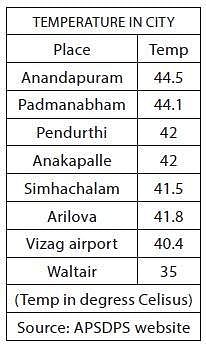 On March 30, Visakhapatnam airport recorded 40 degrees Celsius and this is the second time in two weeks the mercury levels climbed up beyond the mark.

Commuters in buses had also a harrowing time. The city roads wore deserted look as people confined themselves to homes during the afternoon. Shops selling fruit juices, lassi, tender coconuts did brisk business. RK Beach was crowded with people to beat the heat.

A private photographer, T Appalaraju, died allegedly due to sunstroke near the DRM office on Monday. The Photographer Association of Vizag claimed that Appalaraju died of heat wave and demanded solatium. Kalyan Prasad, who is monitoring sunstroke deaths at present, said they had not received any information.