About 32 dengue positive cases reported in Visakhapatnam district this year

Dengue cases have made a comeback in the city. As many as 32 positive cases have been reported from Vizag district this year so far, with majority from the city limits.

VISAKHAPATNAM: Dengue cases have made a comeback in the city. As many as 32 positive cases have been reported from Vizag district this year so far, with majority from the city limits.

According to the officials of District Medical and Health department, since January 1 to May 15, as many as 466 persons had symptoms of dengue and their test samples have been sent for examination. As many as 32 of the 466 persons were tested dengue positive.

Nine cases were registered from the urban areas, while another 14 from peri-urban limits. Another six cases were reported from rural limits and three from Visakhapatnam agency. Fishing Harbour, steel plant, port, One Town and a few other areas are the dengue hubs, say officials.

The city recorded most of the dengue cases last year, with 1,127 persons testing dengue positive. One person succumbed to it. 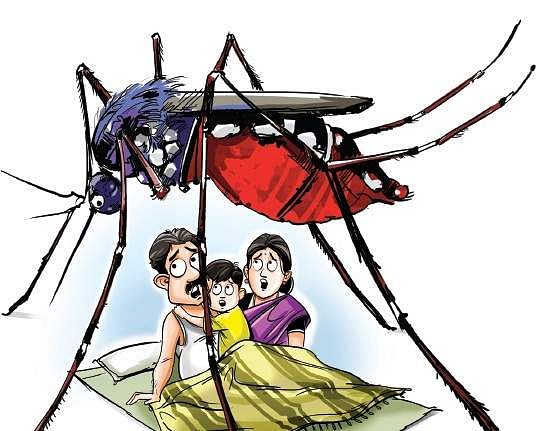 Keeping in view the last year cases, the Health department is on its toes.

Joint collector-II D Venkat Reddy has already conducted a review meeting with the officials of the department and told them to create more awareness on the disease and the precautionary measures.

The JC-II has already asked his offficials to continue with the government programmes like “Domalu pai danda yatra”, ‘dry days’ on Friday, conducting awareness programmes in schools, colleges and government offices.

The JC also asked the Health department to take all measures, including creating awareness among the locals wherever a person tests dengue positive.

District Health and Medical Officer (DMHO) Uma Sundari said that the situation was not alarming as we are taking all precautionary measures. People need to make sure that there is no water stagnation on their premises. “Generally in August, September and October, we see more dengue cases.

During monsoon, we need to take more necessary precautions like no stagnation of water to avoid formation of larvae,” she said adding that Fridays are being observed as dry days at the grassroots level, as part of which the localities are being cleaned to prevent growth of larvae. People need to rush to hospital if they find symptoms and the mosquito-borne disease can be cured.