With just a year and a half left for the next elections, Chief Minister N Chandrababu Naidu, who is in Delhi, lost no time in pushing forward discussions on the Polavaram project.

VIJAYAWADA: With just a year and a half left for the next elections, Chief Minister N Chandrababu Naidu, who is in Delhi, lost no time in pushing forward discussions on the Polavaram project.
The Chief Minister called on Union Finance Minister Arun Jaitley on Friday and brought to the notice of the Centre the urgency of releasing funds for the project to ensure its completion by 2019. The revised estimate of the project is `58,319.06 crore (2013-14). The estimate in 2010-2011 was `16,010.45 crore.
Naidu reiterated that it was the responsibility of the Centre to fund the project fully and bear the expenses of the rehabilitation of the displaced in accordance with the Land Acquisition Act, 2013.  The scheme was declared a national project in 2014.

To speed up the venture, Naidu recently took away `1,000 cr worth of work from main contractor Transstroy which has been running in losses. Though Union Water Resources Minister Nitin Gadkari had suggested that the Andhra Pradesh government continue work with Transstroy, the state Cabinet, which met on Wednesday, disqualified Transstroy from doing a chunk of the project work. The ground is now set for calling fresh tenders to award the work to another contractor. 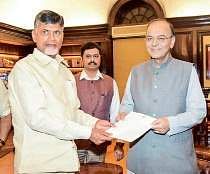 Despite the fact that roping in another contractor will push costs up by `300 crore, the government is going ahead with the plan as it is keen on completing the construction of at least the coffer dam by next elections. While speaking with Jaitley, the Chief Minister also sought to know when the special package announced to the state in lieu of Special Category Status would be handed over.

During an interaction with mediapersons after the meet, the TDP chief said the state was doing everything to rush Polavaram works. “As the paucity of money should not become a hurdle, I appealed to the Centre to increase the flow of funds. If we fail to complete Polavaram now, it will never be completed,’’ he claimed.

As per official data, the state government has so far spent `12, 465 crore on the project and is yet to get `3,000.50 crore from the Centre.Later, Naidu discussed the possibility of increasing the number of Assembly constituencies in the state with Union Home Minister Rajnath Singh. “As the issue of enhancing the number of MLA seats is stated clearly in the AP Reorganisation Act, I raised the issue with him,” he said.

Fast facts:
The Polavaram project was declared a national project in 2014.
Therefore ,the rehabilitation burden lies solely with the Centre
A58,319.06 cr
Revised Polavaram project cost
A16,010.45 cr
Initial estimate
The construction of the irrigation project’s coffer dam may begin sooner than later
A1,000 cr
worth work taken away from main contractor Transstroy despite Union Water Resources Minister Nitin Gadkari’s advice