The Transport department officials initiated a special drive against traffic violators in Guntur district on Sunday.

A fine of `7,36,000 was imposed in 368 traffic violation cases from March to October in Guntur district.
The officials have also suspended the driving licences of those caught while driving under the influence of alcohol for three months and the remaining cases have been referred to the court.

The car owners have been also warned against using private cars as taxis because it is illegal. “Anyone using a private car as a taxi is violating the law,” said the Deputy Commissioner.

He said that those using their private cars as taxis were being penalised. He said `3.92 lakh penalty has been imposed on 286 car owners from April to October in Guntur district.

“Passengers using such illegal means of transportation should avoid it because they may be compromising on safety just to save some money,” he said.

He added that drivers of these illegal taxis are not trained to work as taxi drivers and it can be a security risk for passengers. 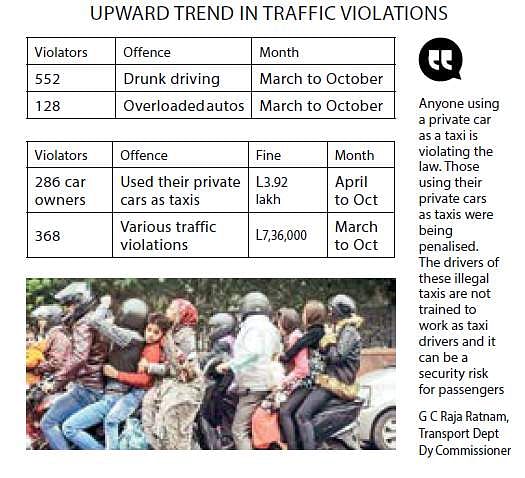 Stay up to date on all the latest Andhra Pradesh news with The New Indian Express App. Download now
TAGS
RTA traffic violators